Dancer and choreographer Emma Portner slammed her felllow Canadian Justin Bieber on Monday and urged him to “stop degrading women.”

Portner, a 24-year-old Ottawa native who starred in the video for Bieber’s “Life is Worth Living” and choreographed his Purpose World Tour, went after the pop star in an Instagram Story.

“The way you degrade women is an abomination,” she wrote. “You continue to collaborate with overly problematic people.”

Portner’s message follows one Bieber posted to his Instagram on Sunday in response to Taylor Swift’s attack on his manager, Scott ‘Scooter’ Braun. Bieber defended Braun’s character and accused Swift of encouraging her loyal fans to bully Braun.

Portner, who is married to Canadian actress Ellen Page, said in her message that she regrets working for Bieber.

“I gave your universe my naive body, creativity, time, and effort. Twice. For content that you made millions off of. While I made zilch. Natta (sic). Barely anything. Less than minimum wage for the hours I invested,” she fumed. “I couldn’t afford to eat. I was sweeping studio floors to be able to practice my craft.”

Portner referred to Bieber’s loyalty to the controversial Hillsong Church, which she claimed “does not support the LGBTQ+ community.”

She urged Bieber to read “a ton of books” and find enlightenment.

“I will gladly purchase and send you some books that will change the way your traumatized brain thinks,” said Portner. “You depend on proper guidance to move forward. I BEG that you find it. A straight white pastor/manager can’t be your only major source of world view.

“I have so much to say but mostly … I really hope you educate yourself beyond your bible. You have IMMENSE power. Use it to STOP DEGRADING WOMEN. We should all be ‘checking on you’ and Chris Brown because you both need to be held accountable.” 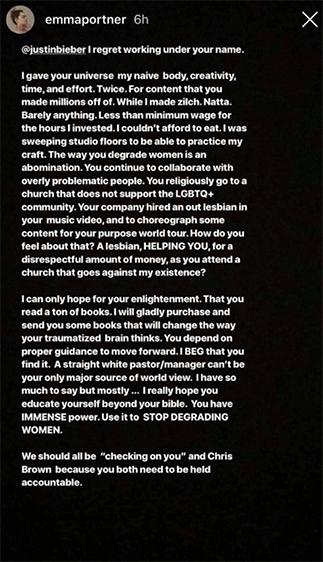