Foo Fighters drummer Taylor Hawkins was found dead Friday in his room at the Four Seasons Casa Medina in Bogotá, Colombia. He was 50.

“The Foo Fighters family is devastated by the tragic and untimely loss of our beloved Taylor Hawkins,” read a tweet on the band’s account on Friday night. “His musical spirit and infectious laughter will live on with all of us forever.

“Our hearts go out to his wife, children and family, and we ask that their privacy be treated with the utmost respect in this unimaginably difficult time.”

Hawkins was on tour with the Foo Fighters in South America and was scheduled to perform at a festival on Friday night. 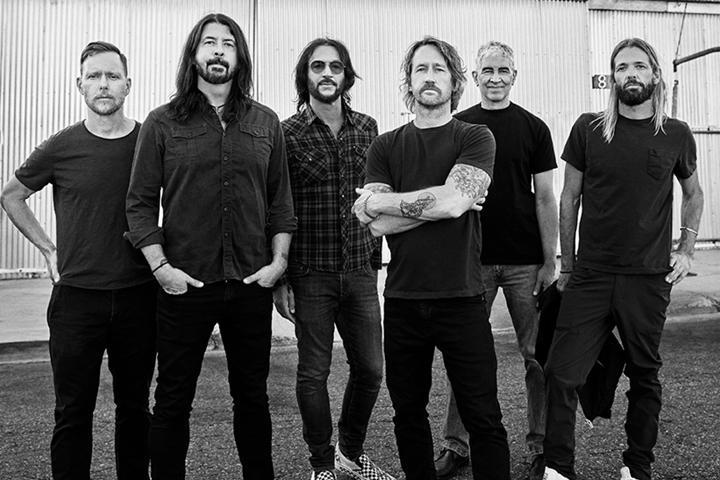 A cause of death was not immediately disclosed but in a statement, Bogotá Metropolitan Police said it “could be associated with the [use] of narcotic substances.”

In 2001, Hawkins spent two weeks in a coma after he overdosed on heroin while in London. “Everyone has their own path and I took it too far,” he told Kerrang! last year. “I believed the bulls**t myth of live hard and fast, die young."

"[Taylor Hawkins] was truly a great person and an amazing musician. My heart, my love and my condolences go out to his wife, his children, his family, his band and his fans. See you on the other side." - Ozzy Osbourne

Born Oliver Taylor Hawkins in Fort Worth, Texas, he was raised in Laguna Beach, California. He played drums in a band called Sylvia before landing a gig as drummer for Canadian singer Sass Jordan.

"I am in shock," Jordan tweeted. "He was my little brother."

In the mid-1990s, Hawkins was the touring drummer for Canada’s Alanis Morissette, backing her during the Jagged Little Pill and Can't Not tours and appearing in several of her music videos, including the one for her breakthrough hit "You Oughta Know."  In 2018, he credited Morissette with giving him his big break. "I wouldn’t be here if it wasn’t for her," he told Beats 1. The following year, he presented Morissette with the Icon Award at Billboard’s Women in Music gala.

Hawkins joined the Foo Fighters in 1997, making his debut in the video for “Everlong,” even though he didn’t play on the song.

In last year’s The Storyteller: Tales of Life and Music, Foo Fighters frontman Dave Grohl described Hawkins as his “brother from another mother, my best friend, a man for whom I would take a bullet.” The singer recalled having an instant bond with Hawkins “and we grew closer with every day, every song, every note that we ever played together.

“We are absolutely meant to be, and I am grateful that we found each other in this lifetime.”

Hawkins’ death comes less than two weeks from the anniversary of the suicide of Grohl’s Nirvana bandmate Kurt Cobain in 1994. 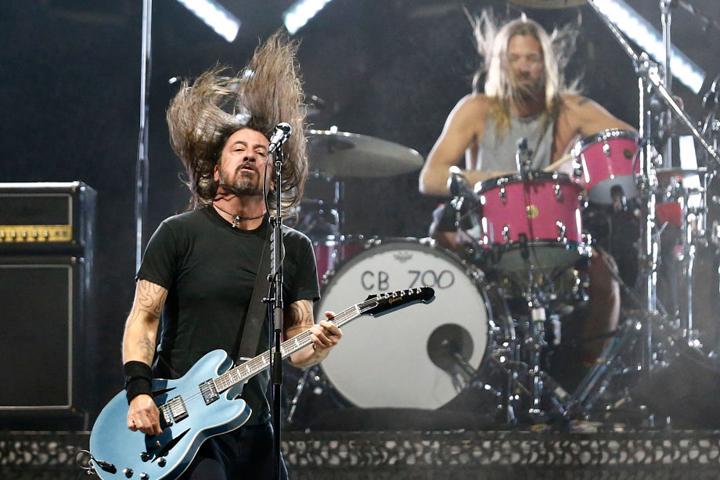 Hawkins’ final show was on March 20 at Lollapalooza Argentina in San Isidro. As he often did at Foo Fighters shows, Grohl swapped places with Hawkins so he could sing Queen’s “Somebody to Love.”

Hawkins, with Foo Fighters, was inducted into the Rock and Roll Hall of Fame last year and had collected 11 Grammys. The band was scheduled to perform at the 64th Grammy Awards on April 3, where it has two nominations.

Foo Fighters are also scheduled to play Toronto’s Rogers Centre on July 22 and to headline the Osheaga festival in Montreal on July 29. The band has concerts lined up in late September and early October in Winnipeg, Saskatoon, Regina, Edmonton, Calgary, Penticton, Victoria and Vancouver. 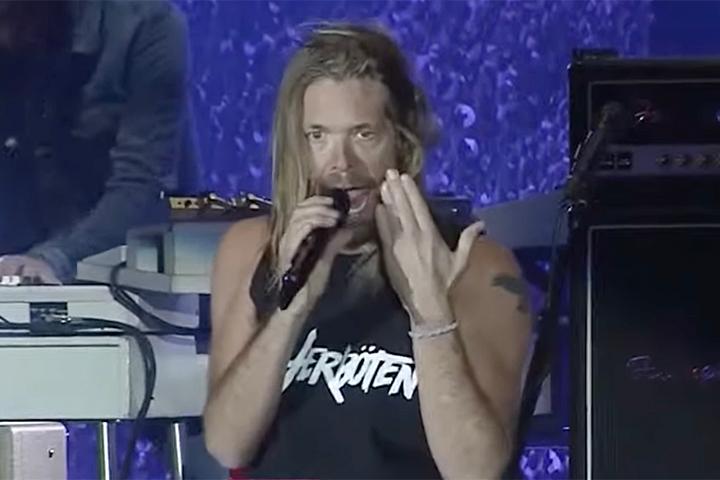 Social media is being flooded with reactions and tributes.

"I don’t have the words," drummer Travis Barker shared on Instagram, along with a photo of Hawkins. "Sad to write this or to never see you again. I’ll never forget Laguna Beach days when I was a trash man playing in a punk rock band and you were playing with Alanis. You’d come watch me play in dive bars and be like, 'kid you’re a star.' And I thought you were crazy but you gave me so much hope and determination. Years later we toured together with Blink and Foo’s in Australia and I have the best memories of smoking cigarettes in the restroom of flights we were on together and watching your set every night. To say I’ll miss you my friend isn’t enough. Till the next time we talk drums and smoke in the boys room … Rest In Peace."

A tweet from Nickelback read: “In utter disbelief at the news of Taylor Hawkins. Our deepest condolences to his family, his bandmates, his team, his friends and everyone that was ever touched by the music he created … This is so incredibly sad.”

The Offspring tweeted: "Shocked and saddened to hear of the loss of one of rock’s greatest drummers." 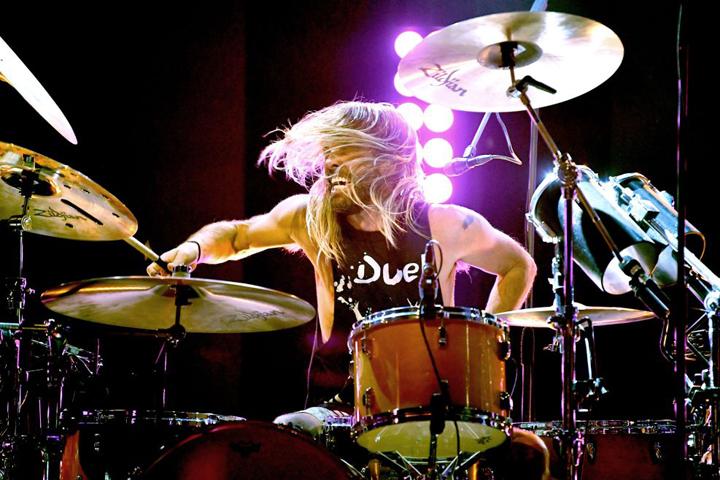 Metallica drummer Lars Ulrich tweeted a personal note to Hawkins. “Thank you Taylor… Thank you for always having the biggest warmest smile on your face and for lighting up every room with your infectious energy and good vibes,” he wrote. “At BottleRock recently, I had the best seat in the house right above you and once again stood in amazement watching as you effortlessly steered Foo Fighters through a two hour festival set with the perfect balance of swing, swagger, bounce and insane chops.

“Your phone call a week ago touched and inspired me and I will always be appreciative for you championing our community as in your parting words…. 'Drummers stick together!’ Damn right brother.  Except now the community is lesser without you.”

Tom Morello of Rage Against the Machine tweeted: “I loved your spirit and your unstoppable rock power." Liam Gallagher said on Twitter he was "absolutely devastated to hear the sad news."

"No. It cannot be. Heartbroken. Taylor, you were family to us. Our friend, our brother, our beloved child. Bless you. We will miss you so bad." - Brian May of Queen

Guns N’ Roses frontman Axl Rose tweeted that he was “shocked n’ saddened” by news of Hawkins’ death. “He was a really great guy, drummer n’ family man,” read a tweet. “Was always great to see him! Was looking forward to seeing him n’ everyone in Daytona. Truly saddened. My deepest condolences to his family, the Foo Fighters n’ their fans.”

Rose’s bandmate Slash tweeted: "Devastated by the loss of our friend #TaylorHawkins. I've no words to express all the feelings I have about his passing. But my heart goes out to his family. & his band & friends."

Finneas shared: “What an incredible talent, who didn’t also need to be so kind and generous and cool but was all those things too anyway. The world was so lucky to have his gifts for the time that it did.”

Wolf Van Halen remembered meeting Hawkins in 2012. “He was such a ridiculously kind man. The dude just emanated cool … An incredible drummer and singer, he was a constant inspiration to me throughout my entire life. This is like a kick in the gut … You’ll be sorely missed, Taylor.”

Hawkins is survived by his wife of 17 years, Alison, and their children Oliver, Annabelle and Everleigh.

Listen to music from Taylor Hawkins