George Michael’s Boyfriend: 'I Hate You'

George Michael’s boyfriend Fadi Fawaz expressed his feelings for the late pop singer and his estate on Saturday, presumably because he was left nothing.

Fawaz tweeted early Saturday morning: “George I hate you,” followed by a rant about his former partner and the legacy he left behind. 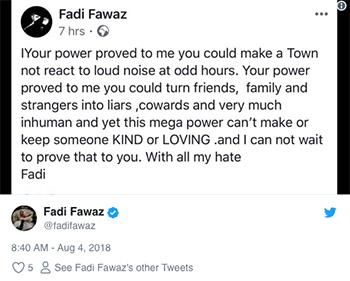 The outrage comes just a week after Michael’s cousin, Andros Georgio, revealed to The Sun that Fawaz was excluded from the will, and is fighting for a share of the pop star’s wealth.

“Fadi is threatening to go all the way to High Court but I think the estate will have to settle with him,” Georgio told the news site. "He’s been offered £500,000 and I think the estate should pay a couple of million to get rid of him."

Michael died on Christmas Day in 2016.