Hayley Williams has responded to accusations that videos for her new solo project ripped off visuals from Swedish singer-songwriter Jonna Lee.

Fans of Lee took to social media last week to point out similarities between images in her videos and some in Williams’ videos for tracks from Petals For Armor.

British editor James Gilmour tweeted: “Dunno how much input Hayley had into her recent vids, but someone on her team is 'borrowing' judiciously from [Lee’s] visual template.

“Also Hayley's vids have been released close together with each vid picking up where the last left off to create an ongoing narrative. Something which [Lee] has been doing since 2010.” 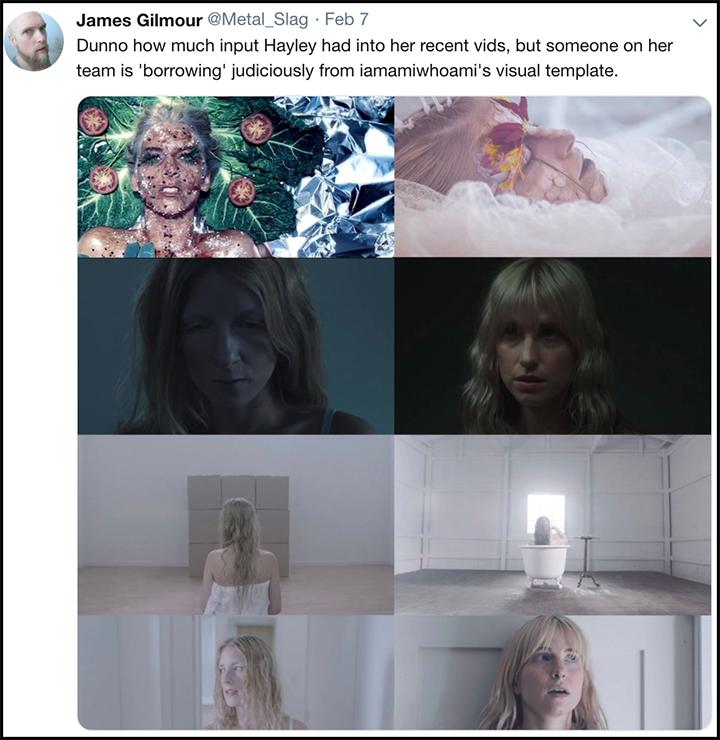 In her response, Williams said she was “very shocked” by the accusation. “I did not know who this artist was – and that’s no slight to this artist because now that I know of them, they seem pretty brilliant,” she said.

"But, look, this s**t happens a lot in creative spaces. We’re all humans feeding off raw human emotion and we’re putting them into our creative works. I’ve seen this happen countless times with Paramore when we’ve seen other people create things that feel similar to things that the band created ourselves. It just happens.”

Williams added: “I have been so enthusiastically vocal about all the influences and inspirations behind the visuals with Petals For Armor … because I’m proud of my influences and I can say with 100 percent confidence I just didn’t know this artist existed until today and she was definitely not one of my inspirations nor one of my influences for this project or for anything that I’ve ever done musically in my career.”

Lee has not commented other than to tweet: “plagiarism is never flattery. use your own brain and body.”

Williams said she hates that her fans and Lee’s fans have been put in a position where they feel they need to defend the artists.

“I hate that something that feels so deeply personal to me comes across as inauthentic to another artist or to someone else,” she said.

“That’s all I have to say about it. I hope that people can accept that.”