INTERVIEW: Bon Jovi on 'This House Is Not For Sale' Song Meanings

They started out as an American rock band from New Jersey in 1983, but now (33 years later in 2016), Bon Jovi is releasing their 13th studio album today (Nov. 4), This House Is Not For Sale, via Island Records. The new record is the band's follow up to 2013's What About Now, and features 12 new songs (15 on the deluxe version), including their title track single, and three other promotional singles "Knockout," "Labor of Love," and "Born Again Tomorrow."

Jon Bon Jovi tells iHeartRadio during an exclusive interview, "I'm so proud of the record. We've worked so very hard on it. I believe it to be a seminal album in our career. And you don't know that when you write it." He adds, "You know, you feel good about the subject matter. You feel great about the way that the recording came out. But you're never a hundred percent confident in it. You're just proud of it."

The album artwork is a black and white image that was made by the forerunner of photomontage, Jerry Uelsmann. It shows an old house with tree roots as it’s anchor. Jon revealed how the image helped inspire him.

On how the cover art influenced the songs on the album

"You've heard the old adage, 'Every picture tells a story.' I was thumbing through a magazine one day, and this picture leapt off the page. It really came to life. The writing process had just begun for me, and I was trying to find focus. But when I saw this picture, this proud, old house, with these deep roots that was in disrepair, it hit me all at once. I said, 'I got it.' Now, I did have a house for sale so subliminally the title just came to me. But, the storyline, I equated it to where the band is or was at that time. And the first line of the song says, 'These four walls have got us a story to tell.' And that sets the tone, and it was the foundation for everything I was going to say." 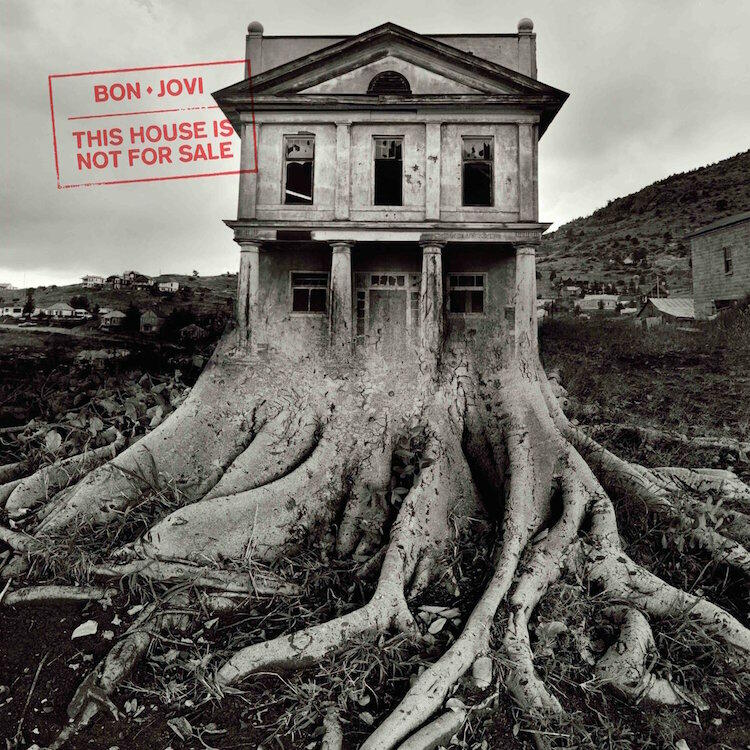 Jon also explained the meaning behind five of the songs on This House Is Not For Sale. He opened up about the song's lyrics and the stories behind them. Check it out below:

"'Knockout' was written from the perspective of that kid inside of me that's still 18 years old. There was a lot of naysayers wondering what I was going to do with this record -- what was the future of the band once again. But I've been to this crossroads before, and truthfully, this one is just an energetic ballad with, harkening back to my teenage days when I say, 'Here comes the boom, boom, boom. Here comes the knock out.'"

"I am not necessarily a fan of roller coasters. I'm going to one as we speak, right after I leave here. But in truth, this is one of only two relationship songs on the records. This is not a record of relationship songs. I often have said that this is an album about life, love, loss, and sweat fell on the pages in between, but thank goodness for me, the love aspect of it, I had a very strong support system in my wife and my family to get me through it. And it's never perfect. I mean, living with an erotic singer in a rock band can't be easy for anybody, but especially for my wife. And so life ain't a merry go round. It's a roller coaster."

"Scars on This Guitar"

"Now this is a song that meant a lot to me emotionally, writing [it]. The guitar is how I've expressed myself my whole life. From the time I was a young kid and wrote 'Runaway' after walking by the Greyhound bus station, I was always inspired to tell someone's story, sometimes my own. And by the time 2014 came around, because her and I really were not speaking, 2013 was a traumatic year in a tour, and for 2014, being on the odds and the outs with my guitar, I kept in the corner on a stand. By 2015, I started to look at it, and nod, and it was giving me the finger. And then I blew it a kiss, and it said, 'Hello.' And then I held it in my arms and it said, 'Okay. What have you got to say?' And I said, 'Well, I don't know. What do you got to say?' And then, we started a conversation. But it says, 'She's the place I go when there's nowhere left to run to. She's the one I hold when there's no one to hold on to. She's with me late at night when I'm drowning in the dark. She heard my every word when I was pouring out my heart, so I thank my lucky stars for every crack, scratch and scar on this guitar.' It really just sorta gives me comfort, when I need it. There's a line, and it's my favorite, it says, 'She's given me her best when I am at my worst.' And that really is it."

FUN FACT: Jon Bon Jovi's guitar is a she, which is why he refers to it as "her." He tells us, "I do refer to it as her. And it's been the same wonderful acoustic guitar that's giving me that magic."

"I think that the lyrics and the recording of it captured that sentiment. It was a defiant song in the face of adversity whether it was with the record company situation that I had to go through, or the future of the band being called into question. 'We Don't Run' is a battle cry for anyone who feels their back against the wall."

On the Meaning Behind "Reunion"

"'Reunion' is a fun song to have written. I was given an honorary degree by Rutgers University, and I'd had a couple of those before, but I was following a man named Bryan Stevenson, who is just an incredible human being at Rutgers. And I knew that oftentimes they're asking Presidents and dignitaries to speak to these college graduates about what life is going to bring them. And although I've lived a lot of life, I thought, 'What can I tell them that's original?' And in this case, I decided to put it into words. And I said, 'You know, you're gonna have to make your own path. You're gonna have to find your own way. And don't fret if it doesn't go exactly as planned. Isn't that what the beauty of life is all about?' But I wrote the song, we captured it, and then I went back to Camden, New Jersey where I was given this, and we shot a documentary around it now. More than a video. It's about the phoenix rising out of Camden and that hope that's there, not only for the graduates, but for the citizens, and what the town hopes to become."