With the reported reboot of Bennifer – the conscious recoupling of Ben Affleck and Jennifer Lopez – it seems necessary to provide a look back at their history. After all, someone born in the same year Affleck and Lopez first hooked up is now legal drinking age.

Those who remember Bennifer version 1.0 know Canada played a significant role in their romantic timeline – but if they are, in fact, giving it another go, it’s unlikely Lopez will be eager to let Affleck back in Vancouver.

Here’s a look back at the history of J.Lo and Ben:

Jennifer Lopez and Ben Affleck begin a three-month shoot for the romantic comedy Gigli in the Los Angeles area. When production started, Lopez was only two months into her marriage to dancer-choreographer Cris Judd. She and Judd would split in June 2002, three months after Gigli wrapped.

Lopez and Affleck start filming Jersey Girl, in which she plays his dead wife.

The video for “Jenny From the Block,” starring Affleck and depicting the paparazzi frenzy over their relationship, premieres on MTV.

Primetime Live aired an interview with Lopez, who confirmed she was engaged to Affleck. "He is brilliantly smart, loving, charming, affectionate,” she told Diane Sawyer. “And I just admire him in every way. I respect him. I feel like he teaches me things.” It is later reported that Affleck popped the question with a 6.1-carat pink diamond worth $2.5 million U.S.

Affleck begins shooting Paycheck in Vancouver. He and Lopez, who are staying in a rented home in North Vancouver, are frequently spotted out and about.

Lopez heads to Winnipeg to start work on the movie Shall We Dance. Affleck flies in on his days off and Lopez makes several visits to Vancouver, where Affleck is shooting Paycheck.

Affleck goes to Brandi’s Exotic Nightclub in Vancouver and reportedly goes into a private booth with four dancers. The encounter is captured on the club’s security cameras.

The front page of the National Enquirer declares: “Ben Cheats On J.Lo.” The report in the issue dated Aug. 12, 2003, is based on claims by Brandi’s dancer Tammy Morris, who claims she had a tryst with Affleck. 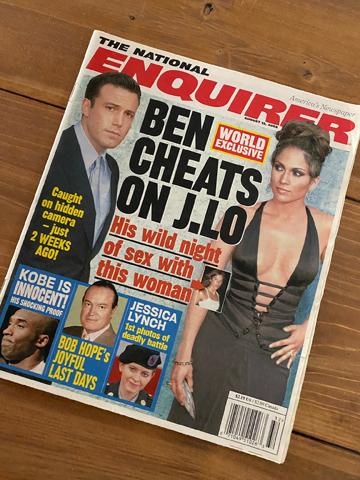 Gigli opens in theatres and is hit with bad reviews. Made on a budget of $75.6 million U.S., the romantic comedy grossed a paltry $7.2 million U.S. at the box office, making it one of the biggest box office flops of all time.

Lopez and Affleck release a joint statement announcing that their wedding, scheduled for Sept. 13 at the Four Seasons Biltmore, has been called off “due to the excessive media attention.” The couple claimed: “We began to feel that the spirit of what should have been the happiest day of our lives could be compromised. We felt what should have been a joyful and sacred day could be spoiled for us, our families and our friends.”

A rep for Lopez confirms the engagement is over. “At this difficult time, we ask that you respect her privacy.”

Jersey Girl opens in theatres. Lopez is not highlighted in any promotions for the movie.

Lopez marries her longtime friend, singer Marc Anthony, at her home in Beverly Hills. “Ben and I split up at the moment when I thought we were committing to each other forever,” Lopez wrote in her 2014 book True Love. “It was my first real heartbreak, it felt like my heart had been torn out of my chest. I sought out comfort in another person, tried to find someone who could make me feel loved and wanted in my loneliest hour. … Marc came back into my life three days after I should have been at the altar saying ‘I do’ to another man.” The couple welcomed twins in 2008 but separated in 2014.

Affleck marries Jennifer Garner in Turks and Caicos in a small ceremony officiated by Canadian actor Victor Garber. They split a decade later, after welcoming three children, and were divorced in 2018.

Lopez is publicly linked to former New York Yankees star Alex Rodriguez. They would go on to announce their engagement on March 9, 2019 via Instagram.

Several media outlets report that Lopez and Rodriguez have split up – which the couple denies. “All the reports are inaccurate,” they said in a joint statement. “We are working through some things.”

Lopez and Rodriguez announce they are calling it quits. "We have realized we are better as friends and look forward to remaining so," the couple said in a joint statement. “We will continue to work together and support each other on our shared businesses and projects.”

Affleck is spotted by paparazzi coming and going from Lopez’s home in Bel-Air.

Lopez and Affleck return to Los Angeles on a private jet after spending several days at the Yellowstone Club in Big Sky, Montana.

TMZ reports that Affleck was “flooding” Lopez with romantic emails as far back as February, while she was filming Shotgun Wedding in Dominican Republic. "We're told the tone of the emails wasn't just friendly ... but more loving and longing for Jen,” read the report.

Listen to music from Jennifer Lopez