The following contains details some may find disturbing. This article has been updated since it was first published.

Justin Bieber took to Twitter on Sunday night to deny allegations of sexual assault made by one of two women on Saturday.

"I want to be clear. There is no truth to this story," the Canadian pop star wrote. He shared several links, screen grabs of tweets, and images of hotel receipts that he said prove he is innocent. "Every claim of sexual abuse should be taken very seriously ... However this story is factually impossible and that is why I will be working with twitter and authorities to take legal action."

Moments later, Bieber's accuser – a 27-year-old woman who identified herself only as Danielle – deleted the Twitter account she had evidently set up solely to share her story. One of her final tweets read: "Justin Bieber is NOT innocent. Justin Bieber is a rapist."

Danielle alleged she was sexually assaulted by Bieber on March 9, 2014 while he was in Austin with then-girlfriend Selena Gomez.

Then 21, Danielle and two friends attended an after-party at Banger’s Sausage House and Beer Garden, where they had an opportunity to meet Bieber and take photos with him. She claimed the pop star and another man invited them to the Four Seasons Hotel.

She said Bieber took her to a room. “Justin had made me agree to not say anything to anyone, or I can get in serious legal trouble,” she alleged, adding that he took her phone. After chatting with Bieber about Gomez’s whereabouts, Danielle said Bieber leaned in to kiss her.

“I was shocked. I was taken away by what he just did. I figured it was a sign to make me shut up, so I kissed his back,” she wrote. “Our small kisses turned into a steamy make-out session.”

Danielle alleged Bieber pushed her down on the bed and removed her jeans. “I told him that this was going too far and that we should stop because I needed to find my friends,” she claimed.

Bieber then took off his pants and underwear and “forced” penetration “without consent,” she alleged.

Danielle said she only told close friends and family members about the alleged assault last year. “What happened to me was not okay,” she wrote.

In a direct message to Twitter user @serayrauhl on Saturday, Allison Kaye, president of Scott “Scooter” Braun’s SB Projects (Braun is Bieber’s manager), called the allegations “factually impossible” because on March 9, 2014, Bieber stayed at an Airbnb. “Any hotel reservation he had in Austin didn’t begin until the following night and was at the Westin not the Four Seasons," she purportedly wrote. 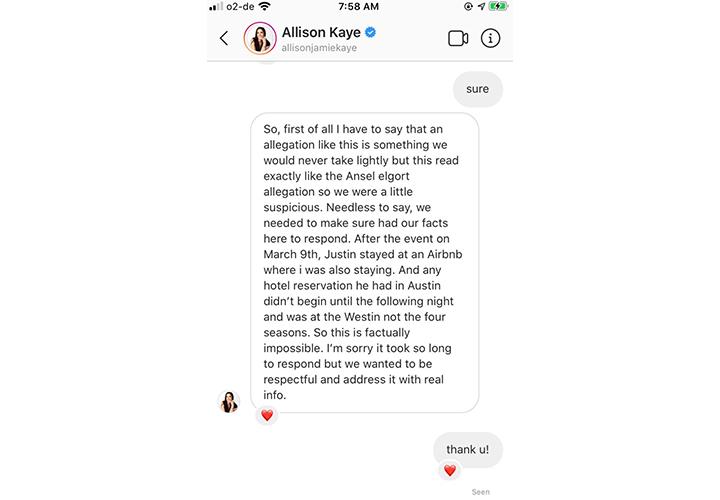 Kaye's statement was echoed by Bieber on Sunday night. He said he "never stayed" at the Four Seasons on March 9 or 10, 2014 – although he may have been at the hotel's restaurant. "I stayed with Selena and our friends at an airbnb on the 9th," he tweeted, "and on the 10th stayed at a Westin because our hotel reservation at LÀ Quinta and not the four seasons was messed up."

Bieber shared copies of receipts for the Airbnb and the Westin – where he was registered under the alias “Mike Lowery.”

He added: "On march 10th selena left for work and I stayed at the Westin as the receipts clearly showed with my friends nick and john before I left town. Once again not at the four seasons. We booked it for a couple days to stay for the defjam show but I bailed on the 11th to head back home."

Bieber explained why he waited 24 hours to respond to Danielle's allegations. "Rumours are rumours but sexual abuse is something I don’t take lightly," he tweeted. "I wanted to speak out right away but out of respect to so many victims who deal with these issues daily I wanted to make sure I gathered the facts before I made any statement."

Before her account went offline, Danielle insisted she was telling the truth. “I have no reason to lie,” she wrote. “If I was doing this for attention, I would reveal my identity.

"I know MY truth. My story has finally been heard and shared. I was afraid of this, but I am not surprised."

In response to Danielle’s original tweet, a woman identified only as “Kadi” tweeted that she, too, was sexually assaulted by the Canadian pop star.

Kadi claimed it happened on the night of May 4, 2015 in a washroom of a suite at the Langham Hotel in New York City. “He started kissing me, touching my body and caressing me,” she wrote. “I asked him to stop and continued to say that I cannot have sex with anyone prior to marriage.”

But, Kadi alleged, Bieber took her to the bed and “pinned” her down and removed her leggings before taking off his shorts and penetrating her. “I pushed him and kicked him between his legs,” she claimed.

Kadi said she told her sister about the alleged assault but did not go public until tweeting – and later deleting – her story in 2017. “That’s when I decided to go to the law enforcement,” she added.

Kadi included screen grabs of text conversations she allegedly had with Bieber’s bodyguard.

Six months before the alleged sexual assault, Kadi tweeted about Bieber’s diehard fans, known as Beliebers. “Y’all believe anything i could make an account with a hot babe as an icon and say i slept with jb and y’all will believe it.”

Bieber has not yet responded to Kadi's accusations.