Kanye West went on a Twitter tirade against Drake on Thursday that culminated with him accusing the Canadian rap star of threatening him and his family.

"You trying to be a bully. I never been bullied in my life and I never will be," West told Drake via the social media platform. "You pick on people with mental health issues. You get people hurt at concerts. You try to pick targets you think are easy."

It all started in the afternoon when West shared a text message he supposedly received from someone asking if he wants to approve a rights clearance request by Drake for “Say What’s Real,” a song on Drake 2009’s mixtape So Far Gone.

“Say What’s Real,” which was produced by West, samples West’s “Say You Will” from his 2008 album 808s & Heartbreak. West needs to give permission for the track to be included in any reissue of Drake’s mixtape or for it to be included on streaming services.

West’s initial response to the request was: “This proves s**t faker than wrestling.”

And then he was off…

“Still need that apology for mentioning the 350s and trying to take food out your idol’s kids mouths,” he tweeted at Drake, referring to “No Stylist, in which Drake raps: “Keepin’ it G, I told her don’t wear no 350s ‘round me.”

West continued: “Been trying to meet with you for 6 months bro … I told you I ain’t tell Pusha about your son.”

The two rappers’ feud started when Drake accused Ye of spilling the tea about his secret son, which ended up being revealed in the Pusha T track "The Story of Adidon." Both Pusha-T and West have denied that West was the source of the info.

Back to West’s tweet storm. “It’s all love bro bro but don’t play with me,” he warned Drake. “You stay too close to be playing all these industry games bro.”

Ye again asked Drake to say sorry. “I need my apologies now,” he tweeted. “Not through Scooter either. Not through Travis.” West insisted he would “never intentionally try to hurt” Drake and claimed he never heard the diss records.

“This ain’t about who could pay to have something done to somebody. This man to man bro. This been bothering me too long.”

West then referenced claims Drake bought the first two rows at a Pusha-T show so they’d be empty. “Buying first two rows at Pusha show got me hot bro,” he tweeted. “Stop this already bro. You getting people hurt out here. And over what.”

After taking a bit of a break from social media, West returned to continue the rap battle.

"Drake called trying to threatened me," West tweeted late Thursday. "So drake if anything happens to me or anyone from my family you are the first suspect So cut the tough talk.

"We both too high profile for you to actually do something to me."

He added: "There would never be a [D]rake without a Kanye [W]est so never come out your mouth with a threat."

He also said Drake's apparent refusal to sit down and talk to him is indicative of a bigger social problem. "That’s why black people never get ahead and and we stay controlled," he opined. "I’m up for talking. We need to show all of these fans that black men can talk without someone ending up dead or in jail."

At least West tweeted an update about the request that sparked it all. “By the way… not cleared.” 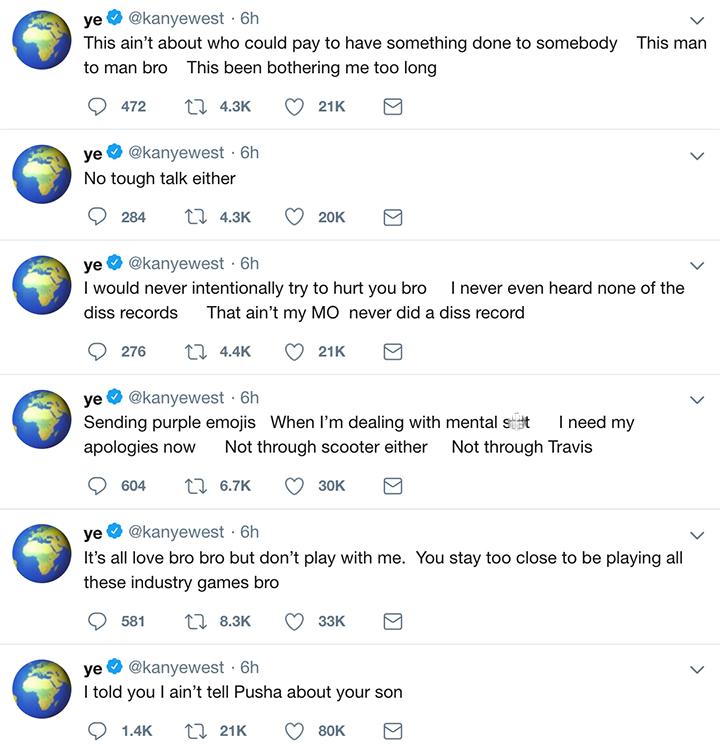 In September, West went at Drake in a series of Instagram videos that have since been deleted. “The fact that people are making rumours and thinking that you f**ked my wife and you’re not saying anything and you’re carrying it well like that, don’t sit well with my spirit,” West said.

West was referring to speculation that Drake hooked up with Kim Kardashian sparked by the Canadian rapper’s mention of Kiki in his hit song “In My Feelings.” Kardashian has previously acknowledged that Kiki is one of her nicknames but she has denied ever being involved with Drake.