Lady Gaga Has Wrapped Production On ‘A Star Is Born’

Lady Gaga has finished filming in the lead role for Bradley Cooper’s upcoming remake of A Star Is Born. Produced by Clint Eastwood, the musical also stars Bradley Cooper and Dave Chappelle.

“That's a wrap on #AStarIsBorn Flowers for my directors and producers,” Gaga wrote in the photo’s caption, which sees her holding a handful of flowers. “Absolutely a dream team”.

Gaga plays Ally, a girl trying to make it in Hollywood who then meets Cooper’s character, Jackson Maine, who shows her the ropes. Eventually, Ally’s fame eclipses Maine’s, and his career nosedives and he must face his flagging glory as Ally’s star rises. In a bit of a twist on the original, the two play country stars.

Previously, Cooper and Gaga filmed a concert scene at Coachella Music Festival where fans in attendance were featured as extras. A press release previously stated that Gaga has recorded some original songs for the film, which she performed as part of the musical plot.

The film is one of three remakes of the 1937 version. The second, released in 1954, stars Judy Garland and James Mason. The 1976 version featured Barbra Streisand and Kris Kristofferson.

See the image below! 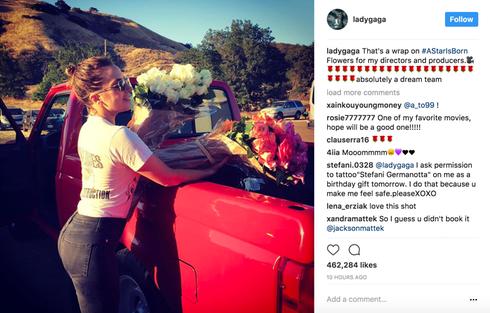