Accepting Female Artist of the Year, Wilson paid tribute to nominees Miranda Lambert, Ashley McBryde, Carly Pearce and Carrie Underwood. "I look up to every single one of the ladies in this category. They have all influenced and inspired me," she said, before vowing to live up to her new title. "I know I’m new to a lot of folks but I won’t let y’all down, I promise you."

Wilson dedicated her New Artist of the Year award to “the 9-year-old little girl who wrote her first song, who knew in her heart that this is what she was supposed to do.” She added: “This right here is for everybody who has believed in me and a little bit for the ones who even didn’t.”

It was also a good night for Luke Combs, who was named Entertainer of the Year and won his second CMA Award for Album of the Year thanks to Growin’ Up. "I want to thank country music for making my dreams come true," the singer said. "This is a dream come true. There is nobody in this category that doesn't deserve to be up here ... I just cannot believe this."

The CMA Award for Male Vocalist of the Year – for the sixth time – went to Chris Stapleton. "All the guys in the category all deserve this award," he said. "Everybody's killing it and I'm so honoured to be a member of the country music community."

Brothers Osborne were named Vocal Duo of the Year for the fifth time since 2016.

Cody Johnson won both Single and Music Video of the Year for “’Til You Can’t” from last year’s Human: The Double Album. The 35-year-old singer credited Ben Stennis and Matt Rogers for writing “one of the greatest country music songs of all time.” 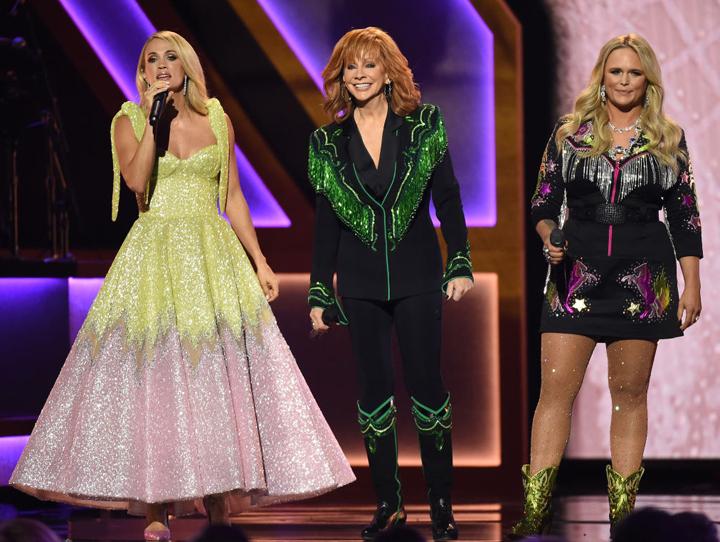 The 56th CMAs at Nashville’s Bridgestone Arena, began with a tribute to Loretta Lynn, who died last month at 90, featuring performances by Carrie Underwood (“You Ain’t Woman Enough”), Miranda Lambert (“Don’t Come Home a Drinkin’”) and Reba McEntire (You’re Lookin’ at Country”). The three then came together to do Lynn’s 1971 classic “Coal Miner’s Daughter.”

Elle King and the Black Keys performed "Great Balls of Fire" in honour of Jerry Lee Lewis, who was inducted into the Country Music Hall of Fame only days before his death at 87.

Alan Jackson, who was honoured with a Lifetime Achievement Award and treated to performances by Dierks Bentley, Jon Pardi and Lainey Wilson, performed his hit "Don't Rock the Jukebox."

Patty Loveless, who has performed only a handful of times since releasing her final album in 2009, returned to the stage to sing “You’ll Never Leave Harlan Alive” with Chris Stapleton and Morgane Stapleton.

Entertainer of the Year

Female Vocalist of the Year

Male Vocalist of the Year

Vocal Group of the Year

Vocal Duo of the Year

Album of the Year

Song of the Year

Single of the Year

Musical Event of the Year

Music Video of the Year

Musician of the Year

Listen to music from CMAs winners