Lana Del Rey has postponed her performance in Israel after receiving significant backlash from fans and political activists, in protest of Israel's Palestinian policies.

Del Rey was originally scheduled to perform at Israel’s Meteor Festival next week.

"It's important to me to perform in both Palestine and Israel and treat all my fans equally," the singer wrote in a statement Friday on Twitter. “Unfortunately it hasn’t been possible to line up both visits with such short notice and therefore I’m postponing my appearance at the Meteor Festival until a time when I can schedule visits for both my Israeli and Palestinian fans, as well as hopefully other countries in the region.” 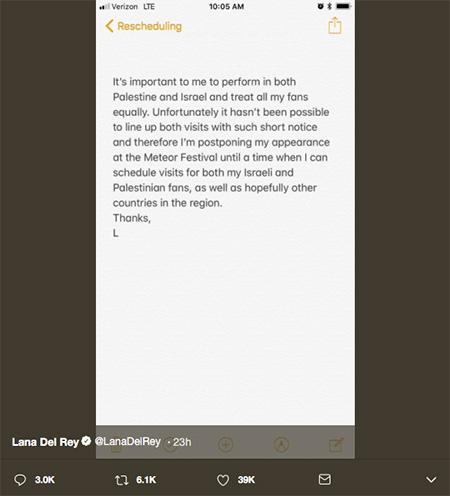 Earlier this month, Del Rey shared her thoughts on music and politics on Twitter, clearly defining her passion for “peace.”

“I don’t not have a political opinion That’s what I’m stating. But it’s not going to stop me from sharing my political/personal passion for peace wherever I go,” she wrote. “Im not a travel agent promoting tourism for each country I go to. I’m sharing my thoughtful genre of music wherever I go.” 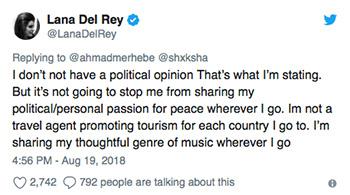 The Palestinian Campaign for the Academic and Cultural Boycott of Israel was fully supportive of Del Rey’s decision to cancel next week’s show, according to BBC.