Adam Cohen, the musician son of Leonard Cohen, who died at the age of 82 last week, took to Facebook to share a personal message.

"My sister and I just buried my father in Montreal," he wrote. "With only immediate family and a few lifelong friends present, he was lowered into the ground in an unadorned pine box, next to his mother and father.

Adam paid tribute to his father's "unique blend of self-deprecation and dignity, his approachable elegance, his charisma without audacity, his old-world gentlemanliness and the hand-forged tower of his work."

He also thanked fans for the outpouring of love and support.

The Montreal Congregation Shaar Hashomayim's Rabbi and Cantor stated that “Leonard’s wish was to be laid to rest in a traditional Jewish rite beside his parents, grandparents, and great-grandparents.” 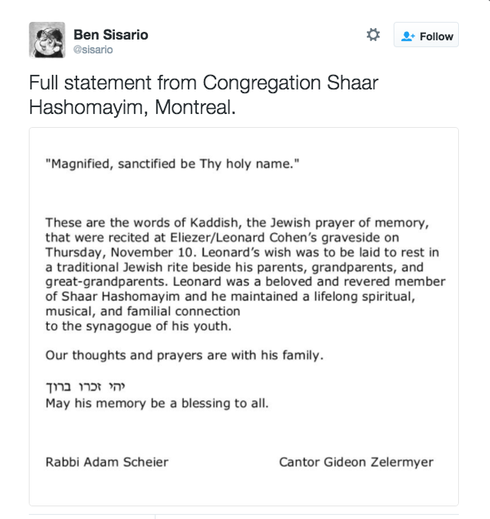