Lil Nas X got tongues wagging with a steamy version of “Montero (Call Me By Your Name)” at Sunday’s BET Awards.

At the end of a performance that paid tribute to the 1992 video for Michael Jackson’s “Remember the Time,” Lil Nas X kissed one of his male dancers.

Among those who loved the moment was Diddy, who tweeted: “Lil Nas X did that!! Be fearless!!! Along with three clapping-hands emojis.

Paris Jackson, the daughter of Michael Jackson, tweeted that Lil Nas X “absolutely f**king killed it” and added “you have all of my support, legend.”

Of course, others took to social media to share their disgust and outrage about the final second of a performance of a song that was released in March.

Lil Nas X was having none of it. “We are 4 months in and people are still acting surprised that i am being gay and sexual in performances of a song about gay and sexual s**t,” he tweeted on Monday.

“like the song is literally about gay sex what y’all want me to do play the piano while baking a cake?”

Lil Nas X acknowledged that he was aware the kiss would spark mixed reactions. “It took me a lot of time to mentally prepare for this performance. while on stage i was trembling knowing that i was performing something like that in front of my straight peers. even during the performance i was having a hard time calming my nerves.”

Madonna came under fire by some fans for her reaction to what Lil Nas X called his “LGBET” moment.

In an Instagram Story, the 62-year-old pop icon posted a screenshot of the Lil Nas X kiss alongside a photo of the moment she kissed Britney Spears at the 2003 MTV VMAs. She captioned it with the hashtag “#diditfirst.” 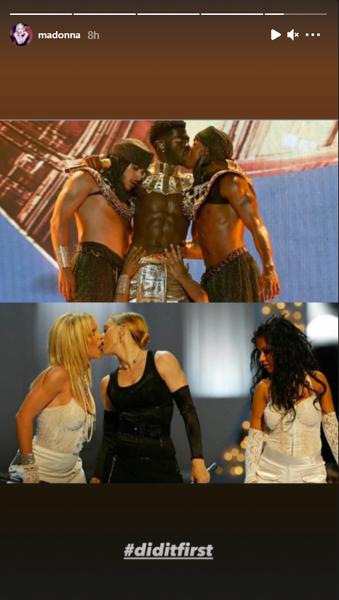 “You had your moment,” read one tweet. “Let a queer black man have his moment!!!”

Another person tweeted: “your whole career was built off of voguing. your vma kiss was literally you queer baiting. the difference between a white woman queer baiting to ‘express her sexuality’ whilst not being queer is eons different from lil nas x expressing his sexuality.”

Someone else who sparked outrage with a same-sex kiss during an awards show is Adam Lambert, who planted one on his keyboard player at the American Music Awards in 2009.

He told Billboard he thought Lil Nas X kissing his dancer was “hot.”

Lambert said: “I mean, he's really giving it to us. I think he is definitely like the gay pop star that is 2021 — he's bold, he's controversial, he's pushing boundaries. That's what we want our pop stars to do. It's just taken this long to have it be a gay one.”

The singer noted the hypocrisy of some of the outrage.

“If it's par for the course for a female pop star to put on a performance like that, then why can't a gay male pop star do the same?

“I hope that double standard is very clear to people.”