Machine Gun Kelly was named Favourite Rock Artist at the American Music Awards (AMAs) for the second consecutive year – and acknowledged his haters.

“There have been some people in the rock community who called me a tourist but they’re wrong. I’m a rocket man,” MGK said, after thanking his fans.

“We weren’t born on the moon but we looked at it, we were curious, and then we went there – supposedly – and these last two rock albums, to me, were me going to the moon.

“But I’m not done exploring the universe yet and I am all genres.”

MGK also poked fun at his outfit, which likely poked a few passersby. “This suit is really uncomfortable to pee in,” he joked.

Måneskin beat out Foo Fighters, Red Hot Chili Peppers, Imagine Dragons – and Kate Bush! – to earn the AMA for Favourite Rock Song thanks to their cover of the 1967 Four Seasons song "Beggin'."

"We still are kind of figuring it out. It’s very surprising for us," said frontman Damiano David. "We never expected to win this category against these huge, huge, huge artists." 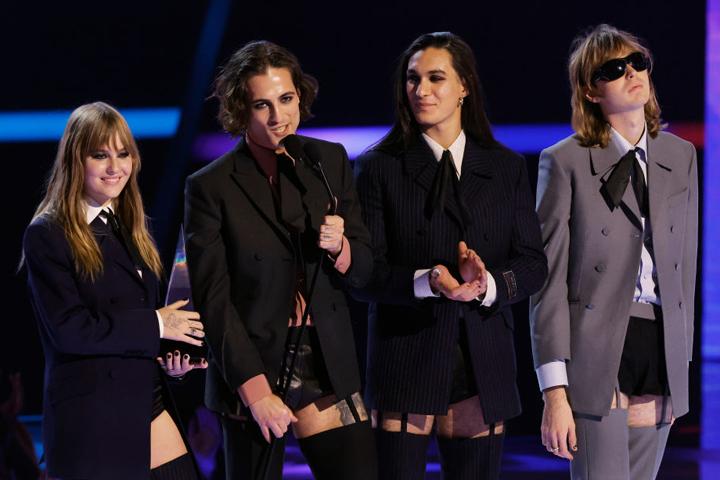 Winners are determined by fan votes from nominations based on “key fan interactions,” including streaming, sales, radio airplay and tour revenues in the year ending Sept. 22.