“Britney we coming to get you our of jail!,” the 62-year-old pop icon wrote in an Instagram Story late Thursday.

Madonna, who shared a photo showing her wearing a tank top emblazoned with “Britney Spears,” wrote: “Give this woman her life back. Slavery was abolished so long ago! Death to the greedy patriarchy that has been doing this to women for centuries.

“This is a violation of human rights!”

Madonna was featured on Spears’ track “Me Against the Music” – the same year the two locked lips on the MTV Video Music Awards.

On June 23, Spears told a judge she wants out of the conservatorship she has been under since 2008. “I’ve lied and told the whole world ‘I’m OK and I’m happy.’ It’s a lie," she said. "I’ve been in denial. I’ve been in shock. I am traumatized. You know, fake it till you make it.

Spears fumed: “My dad and anyone involved in this conservatorship and my management who played a huge role in punishing me when I said no — ma’am, they should be in jail.”

Following her comments, Spears’ longtime manager Larry Rudolph and court-appointed lawyer Samuel Ingham have resigned, and the co-conservator of her estate, Bessemer Trust Company, has filed an application to step away from the role.

In a court filing dated July 1, the singer’s mother Lynne – who is not part of the conservatorship – asked the court to honour Spears’ request to hire her own lawyer and said: "Now, and for the past many years, [Spears] is able to care for her person.”

A hearing about the conservatorship is scheduled for July 14. 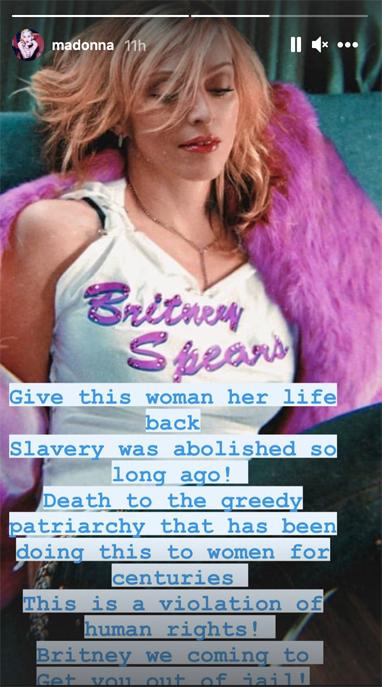