Nikki Sixx Calls Out Auction Item: 'Not My Shirt'

According to the description, the shirt was worn by Sixx during the final encore of Mötley Crüe’s farewell concert on Dec. 31, 2015 at the Staples Center in Los Angeles. The band closed the show with “Home Sweet Home.” 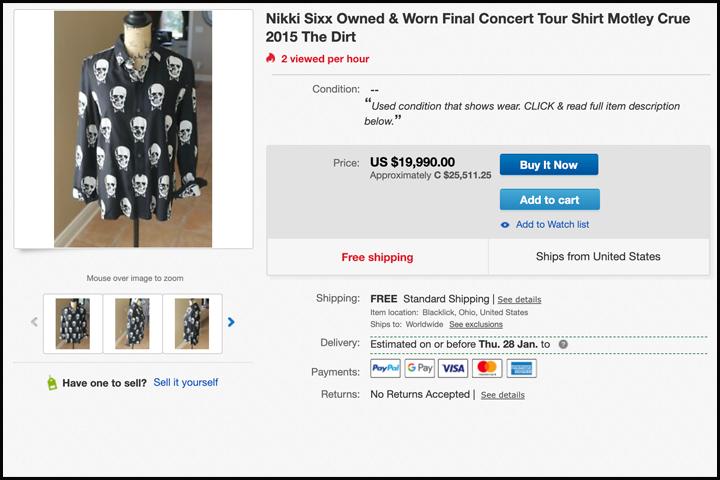 Scott claimed “Nikki wore this shirt many nights of the Final Tour. There are 1000s of photos out there of him wearing it.” Calling the garment “a piece of Rock N’ Roll history,” he boasted that it is “Hard Rock Café museum quality.”

But, the sale came to the attention of Sixx, who shared a screen grab in an Instagram Story that he captioned: “Not my shirt.” 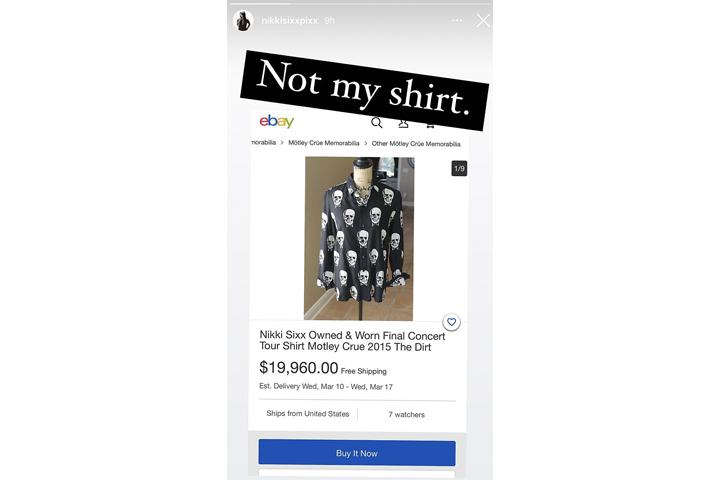 On Tuesday, the eBay Canada listing was deleted.

The shirt was one of several alleged pieces of Crüe memorabilia Scott is selling online. He describes himself as a friend of the band who has “acquired tons of their memorabilia over the years” – although he never offered an explanation of how he allegedly got the shirt from Sixx.

Scott, 46, said he’s been “close to the band for years and can back it up” and claimed he gets the memorabilia “directly from the band or impeccable sources with 100% authentication and proof.”

The message on his listing reads: “Trust me … I am actually personal friends with the band and I own the largest collection of Mötley Crüe memorabilia in the world. I own most of their old basses, guitars, and clothing.”

The black shirt emblazoned with skulls – like the one Sixx wore on stage – is from Saint Laurent and can be found online for between $650 and $775.

Listen to music from Mötley Crüe