The ex-wife of Phil Collins is auctioning a pair of portable speakers with cases purportedly autographed by Collins and Canadian superstar Shania Twain.

The white Pinel et Pinel cases and Yamaha Portable Player Docks are among the items Orianne Cevey is selling in an online auction on Wednesday.

No information is provided about when Twain supposedly personalized the case. (The description of the auction lot misspells Twain's first name as "Shanaia.")

The signatures are slightly different than a sample of Twain’s autograph at PSA Authentication & Grading Services. 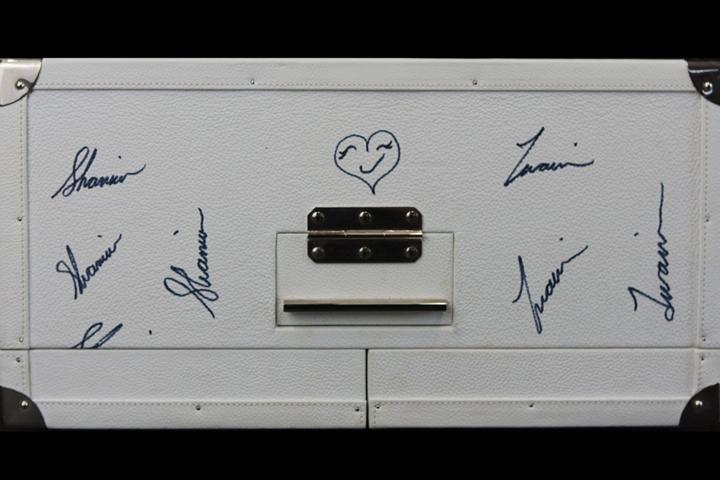 The second case in the lot is purportedly signed by Collins, who also drew a cartoon drummer. The year “2010” appears.

Auction company Kodner estimates the two items will fetch between $200 and $500 U.S.

(According to Yamaha, the PDX-30 was discontinued. Various sellers online are offering the docks for between $50 and $65 CAD.)

Last month, Cevey auctioned a collection of personal items, including Gold certifications presented to Collins by the Canadian Recording Industry Association and WEA Music of Canada in the early ‘80s.

Last year, Collins went to court to evict Cevey and her husband from his Miami Beach mansion, which was once home to Jennifer Lopez. Collins recently sold the property for a reported $40 million U.S.