Rascal Flatts singer Gary LeVox says he has questions about the source of the explosion in Nashville on Christmas Day.

According to the FBI, 63-year-old Anthony Quinn Warner parked his RV on a street in downtown Nashville early on Christmas morning. After broadcasting warnings, the vehicle exploded at 6:30 a.m. local time, killing Warner and injuring eight people. The blast also caused extensive damage to vehicles and buildings in the area.

On Monday, LeVox posted screen shots of the bombing scene on Instagram and described it as the “NASHVILLE MISSLE (sic) ATTACK.” He wrote: “HMMMMMM???? It will b interesting to see what cover up happens with this crap! Let’s see what they come up with. What are your thoughts?” 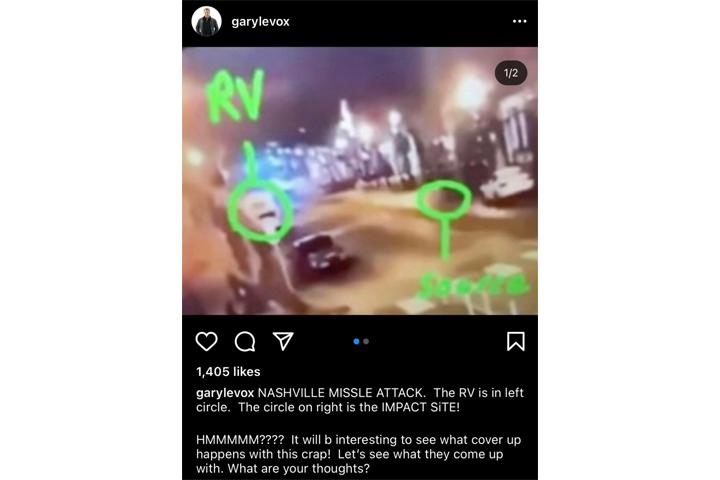 LeVox deleted the post after being widely criticized. “I just wanted to hear what everybody else thought,” he told Indiana radio station KORN Country 100.3. “I never saw so much hate.”

The 50-year-old singer said “friends in the police force, in the military” – as well as a retired Dallas police officer – told him there was something suspicious about the bombing. He said Nashville cops who had been at the scene told him “this doesn’t make a lot of sense.”

LeVox explained: “I was like, ‘wait a minute… there's the RV, and there's the source of the explosion. I don't know anything about explosives but it did raise the question to me, like, ‘hmm.’

“I'm the last political conspiracy theory person on the planet. If it didn't come from my friends who I really trust and know [about] explosives…”

LeVox said he hopes the explosion was indeed nothing more than the work of a “lunatic,” but, he added, “I don't know if this is truly what it is or what it's not … everything in 2020 has been a cover-up so my point was… let's see how they'll cover-up this. This entire year has been … nothing has been at face value.”

Although he deleted the controversial post, LeVox stands by it. “When this thing happened in Nashville, I’m like, ‘OK here we go with this. Let’s see how they try to cover this up.’

Listen to music from Rascal Flatts