Rihanna is gonna be a mama!

The 33-year-old singer and entrepreneur has revealed she is expecting her first baby with rapper A$AP Rocky.

The couple did a paparazzi-style photo shoot with celebrity photographer Miles Diggs (aka Diggzy) on Friday in the Harlem neighbourhood of New York City. The pics were released early Monday.

Rihanna showed off her bare baby bump while wearing an open Chanel coat from the 1996 collection. 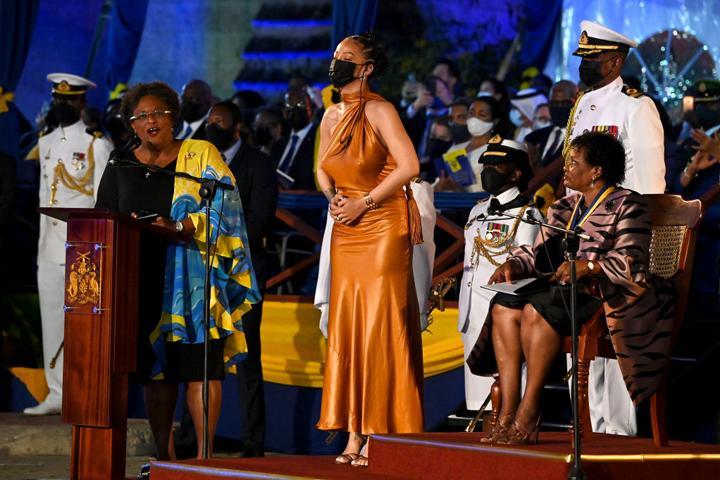 Last November, Rihanna sparked pregnancy whispers while in her native Barbados for a ceremony naming her a National Hero. The singer repeatedly held her hands in front of her stomach.

This past weekend, some fans guessed Rihanna was pregnant after she showed up at a Sephora store in New York City wearing an oversized coat. One TikTok user declared: "If she’s not pregnant, I’ll eat crow."

Rihanna opened up about becoming a mom in a 2020 interview with British Vogue. She said she will have kids – “three or four of ‘em” – in a decade, even if she doesn’t have a husband.

Rihanna and A$AP Rocky have known each other for years (he opened for Rihanna on her 2013 tour) but it wasn't until January 2020 when their relationship was revealed by UK tabloid The Sun.

A$AP Rocky, 33, made it official in early 2021 when the rapper described Rihanna as “the love of my life" in an interivew with GQ.

“She amounts to probably, like, a million of the other ones,” he said. “When you know, you know. She’s the one.”

Asked if he’s ready for fatherhood, A$AP Rocky replied: “If that’s in my destiny, absolutely … I’d be an incredible, remarkably, overall amazing dad. I would have a very fly child. Very.”