Little Richard, the flamboyant icon of late-50s rock and roll, died Saturday in Nashville after battling bone cancer. He was 87.

The singer’s death, four years after he issued a statement denying reports that he was gravely ill, was confirmed by son Danny Penniman and agent Dick Alen.

"He was battling for a good while, many years," said Alen, in a statement. "I last spoke to him about two or three weeks ago. I knew he wasn’t well but he never really got into it, he just would say ‘I’m not well.’ He’s been suffering for many years with various aches and pains. He just wouldn’t talk about it much."

Little Richard had a heart attack in 2013 and had been relying on a wheelchair for mobility for about a decade due to hip problems. In 1985, he suffered broken ribs, a broken leg and head injuries after crashing his car into a utility pole in West Hollywood in 1985.

"A founding Father of Rock And Roll, his contributions simply can’t be overstated," tweeted Gene Simmons of KISS. "I had the honour of meeting Richard in his later years and was awed by his presence. He told me, 'I am the architect of Rock And Roll.' Amen!"

"He was my shining star," read a tweet from Bob Dylan, "and guiding light back when I was only a little boy. His was the original spirit that moved me to do everything I would do.

"I played some shows with him in Europe in the early nineties and got to hang out in his dressing room a lot. He was always generous, kind and humble. And still dynamite as a performer and a musician and you could still learn plenty from him."

Dylan added: "In his presence he was always the same Little Richard that I first heard and was awed by growing up and I always was the same little boy. Of course he’ll live forever. But it’s like a part of your life is gone."

Little Richard entertained a generation with hits like “Tutti Frutti,” “Good Golly Miss Molly,” “Slippin’ and Slidin’” and “Long Tall Sally” (which The Beatles covered in 1964). His last of more than two dozen albums was released in 1992 and he last performed on stage in 2014.

"Little Richard came screaming into my life when I was a teenager," tweeted Paul McCartney. "I owe a lot of what I do to Little Richard and his style; and he knew it. He would say, 'I taught Paul everything he knows.'"

Born Richard Penniman in Georgia, he moved away from his family’s home at 13 to escape his homophobic father. He competed in talent shows and played live gigs before earning a record deal in 1951.

"He paved the way for (code for he was ripped off by) so many artists," tweeted Bette Midler, who called Little Richard "genius, pure and simple."

A tweet from the Prince estate said "Little Richard's influence on music cannot be understated. He didn't just open doors, he smashed entire walls to pieces to make way for all who would come after him."

Describing Little Richard as "a true legend, icon and a force of nature," Elton John shared: "Without a doubt – musically, vocally and visually – he was my biggest influence. Seeing him live in my teens was the most exciting event in my life at that point. Goosebumps, electricity and joy came from every pore. His records still sound fresh and the opening few seconds of 'Tutti Frutti' are the most explosive in music history.

"I was lucky enough to work with him for my Duets album in 1993. He was shy and funny and I was SO nervous. The track we recorded 'The Power' is a favourite in my catalogue. We also played live at the Beverly Hilton and I felt like I’d died and gone to heaven. He influenced so many and is irreplaceable." 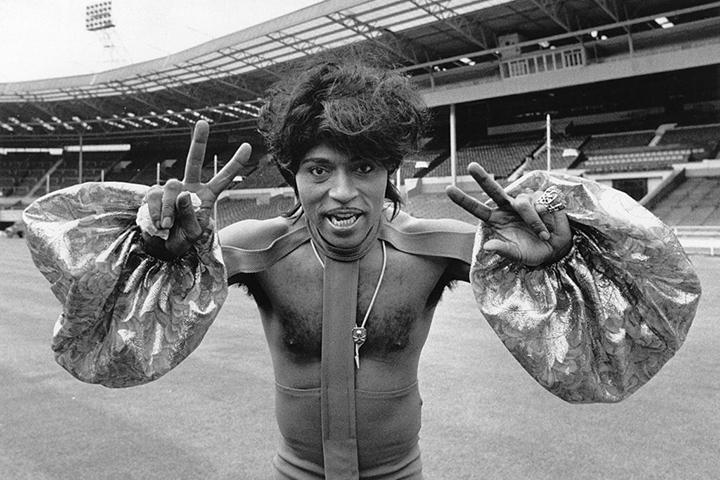 As his music career flourished, Little Richard found himself in demand for guest roles in movies and TV shows – and he was the subject of the 1973 documentary Let the Good Times Roll.

He battled alcohol and drug addiction early in his life – he admitted to having used cocaine, heroin and PCP.

Little Richard's deep religious beliefs forced him to struggle with his sexuality. He left Oakwood College after he was caught exposing himself to a male student and was arrested in 1962 for spying on men at the urinals of a bus station washroom in Long Beach.

In a 1995 interview with Penthouse, Little Richard said: “I’ve been gay all my life.” But throughout the years he repeatedly denounced homosexuality as “unnatural.”

Little Richard had relationships with women, including on-again, off-again girlfriend Audrey Robinson. His marriage to Ernestine Harvin, with whom he adopted son Danny, ended in divorce in 1964 after five years.

Little Richard was one of the inaugural inductees to the Rock and Roll Hall of Fame in 1986 (he could not attend the ceremony due to the injuries sustained in the 1985 car crash) and he was honoured with a Lifetime Achievement Award at the Grammys in 1993.

Tributes to Little Richard are pouring in on social media, where a tweet from Sister Sledge described him as "one of the greatest men in music" and Bruno Mars said "Love you Little Richard."

"You're a true original, you broke all the rules and you weren’t afraid to show it," tweeted Tom Jones. "A magnificent talent and an inspiration to so many of us."

"He was the biggest inspiration of my early teens and his music still has the same raw electric energy when you play it now as it did when it first shot through the music scene in the mid 50’s," wrote Mick Jagger on Instagram. "When we were on tour with him I would watch his moves every night and learn from him how to entertain and involve the audience and he was always so generous with advice to me. He contributed so much to popular music."

Actress Viola Davis tweeted: "The Originator. The innovator. The musician, performer who influenced generations of artists....has left. You were AWESOME #LittleRichard!!! Your talent will reverberate forever. Well done sir."

Cyndi Lauper said Little Richard officiated her wedding with actor David Thornton in 1991. “He was really one of the truly great rock and roll singers,” she shared in a tweet, “and one of the rock and roll pioneers. He will be missed.”

Brian Wilson remembered "he was there at the beginning and showed us all how to rock and roll. He was a such a great talent and will be missed. Little Richard’s music will last forever."

Listen to music from Little Richard