Faced with allegations on social media that he is responsible for last week’s sudden cancellation of the Roxodus music festival in Ontario, Mike Dunphy will break his silence on Monday.

“I will make additional information available that will clearly show I took nothing from the event,” he told iHeartRadio.ca on Sunday. Dunphy said he will share documents “clearly showing that every decision regarding expenditures were signed off by [Fab] Loranger.”

Dunphy and Loranger are the “MF” in Roxodus production company MF Live Inc., a company Loranger registered in Alberta last September. Both men live in Ontario – Dunphy in Wasaga Beach and Loranger in Niagara on the Lake.

Childhood friends, they had an ambitious plan to stage a classic rock festival for 40,000 fans on two adjoining pieces of land 90 minutes north of downtown Toronto.

With headliners like Aerosmith, Kid Rock, Nickelback and Lynyrd Skynyrd, the four-day event was scheduled to kick off July 11. Passes were sold for between $129 and $639 and camping packages were priced between $219 and $1,600.

At 8 a.m. last Wednesday morning, Loranger confirmed what was first reported by iHeartRadio.ca nearly two hours earlier – he was pulling the plug on Roxodus.

“It is with a heavy heart that we announce the cancellation of the Roxodus Music Festival this year,” read a statement. “Our team has worked tirelessly to find a solution in which the show can go on but unfortunately, we could not make it happen this year.”

The announcement was followed by silence from both Loranger and Dunphy as social media exploded with rumours and comparisons to the infamous Fyre Festival. A sentence promising information on refunds disappeared from the website.

Fueling the speculation was confirmation from the Ontario Provincial Police that it was investigating a complaint against a former employee of MF Live Inc. The OPP has not identified any suspect.

Then, in a statement issued Friday evening, Dunphy insisted he “did not sign contracts, issue cheques or control funds received from ticket sales.” He added: “I have not stolen monies as widely rumoured on social media.”

Dunphy also claimed he was not involved “with any decisions” to cancel Roxodus.

On Saturday, Loranger countered with a statement of his own, in which he said he relied on Dunphy’s expertise and advice. “We invested millions of dollars,” he said, via email. “We lost it all.”

The “we” Loranger is referring to is Taurus Investment Group Inc., a company registered in Alberta in 2013 (not to be confused with a U.S. firm with the same name) that shares a Fort Saskatchewan mailing address with Taurus Projects Group Inc., also owned by Loranger.

Although Dunphy was the public face of Roxodus – he appeared in front of Clearview Township council and hyped the festival in media interviews – it was Loranger’s company that provided the financing.

Dunphy came to the venture with some baggage. He shut down Dauphin Media Group in 2012 amidst accusations of making off with an estimated $500,000 in subscription fees and allegedly stiffing its Toronto landlord.

Records show the Roxodus domain was registered by the ostensibly defunct Dauphin Media Group in October 2018, a month after MF Live Inc. was registered in Alberta.

Dunphy had also just cancelled the 2019 edition of the Wasaga Beach Motorcycle Rally.

According to a 2012 post on the SportsJournalists.com forum by someone with the user name “Huggy," Dunphy was hired by a hockey team to be its photographer and was provided with valuable camera gear.

“He proceeded to blow off our Sunday afternoon home games to go to Buffalo (with the team's camera) and shoot the Bills,” reads the post. “Or he'd decide he didn't want to make the two-hour commute from his house to our home games.”

Dunphy was fired but the team had to fight to get its photography equipment back, "Huggy” alleged.

Dunphy is also accused of ripping off suppliers and service providers involved in a professional slo-pitch tournament in Welland, Ont. that featured an appearance by singer Michael Bolton.

Tim McClure, a former VP at Starter Canada, recalled how Dunphy convinced the company to supply apparel for the weekend event with an assurance it would be paid thanks to a sponsorship deal he had with restaurant chain Swiss Chalet.

“We would find out only days prior to the event that Swiss Chalet was not a sponsor,” McClure told iHeartRadio.ca. “We had no idea if they ever were confirmed.”

McClure remembered the event, roughly 20 years ago, was a disaster. “Very little of what he claimed and promised had happened – from attendance and tickets sold, to activities and set up.

“As we got into the latter half of the final day, one thing was obvious: This was a total bust.”

McClure said he and representatives of other companies that were owed money confronted Dunphy inside a mobile trailer on site. Police had been notified in case things got out of hand.

“It was obvious that every company was going to get screwed,” McClure recalled, adding that Starter Canada alone was owed “tens of thousands” of dollars.

Asked about both of these recollections, Dunphy declined to comment.

Staging Roxodus was not going to be cheap. Like most new festivals, it had to pay up front for the music acts it booked, and most of them in U.S. dollars. Aerosmith typically won’t step on stage for less than $1 million and the festival boasted several retro acts like Billy Idol and Blondie who each command about $200,000.

The company secured a lease agreement with Milan Kroupa, owner of the Edenvale Aerodrome, to use the private airport for the festival.

Taurus Investment Group also purchased a 172-acre parcel of land – technically Lots 13, 14 and 15 on Concession 10 – adjacent to Edenvale Aerodrome for $2 million at the end of 2018. The deal, brokered by Andrew McKay of Remax in Wasaga Beach, closed in February.

The combined space was going to accommodate Roxodus stages, vendors, camping areas, parking and thousands of fans in the 45+ demographic or, as Dunphy told township council on March 4, people who are “not an age that will go stand in a field all day anymore.”

Taurus brought heavy equipment to its property and removed about 44 acres of trees and vegetation to create more open space. It also installed tile drainage.

Andreas Tzembelicos, who sold the land to Taurus, said it was part of a military air base in the early 1940s and still has about 750 metres of a runway that he estimates is the width of six car lanes. “The area inside has quite a bit of asphalt,” he said.

As part of its township approval process, Taurus commissioned an environmental impact study, which was completed by Azimuth Environmental Consulting of Barrie, Ont. and submitted to the company on May 8.

The report concluded that “recent site activities undertaken at the Roxodus Festival grounds resulted in the loss of woodland and wetland area. Additionally, fish habitat was negatively impacted and is currently in a vulnerable state.” It recommended several remedies.

Mayor Doug Measures said last week that the township did everything it could to protect taxpayers. But, he added, “right from the start I had great suspicion” that the event was never going to happen.

“There are so many moving parts involved,” he said. “It’s difficult to pull off.”

Tzembelicos, who has never met Loranger or Dunphy, doesn’t know what went wrong. “Maybe they didn’t have enough time,” he said. He is skeptical of the excuse given for the festival’s cancellation – that “tremendous rainy weather … impacted our ability to produce the festival.” 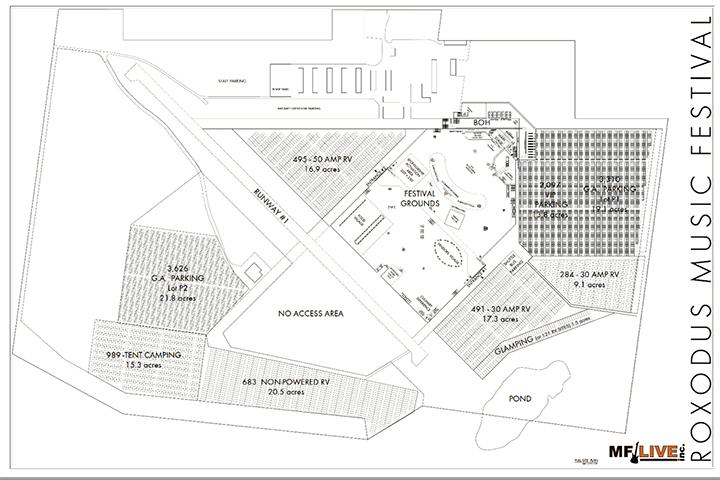 Last Wednesday’s statement about the cancellation of Roxodus implied it could try again. It referred to the event being “on hold” so they had time “to nurture our venue into a premier landmark in Ontario.”

But, Milan Kroupa, owner of the Edenvale Aerodrome, told Barrie Today that Loranger asked him last Tuesday – a day before the cancellation was announced – if he wanted to purchase the property from Taurus.

Loranger should talk to Tzembelicos instead.

“I’ll be glad to give him 50 per cent of what he gave me and buy the property back,” Tzembelicos said. “I don’t mind.

“I won’t give him the money back but if he wants half the price that they bought it for, yes.”

Repeated calls to Loranger’s home went unanswered and he did not respond to a list of questions sent via email.

On social media, Roxodus customers continue to speculate on what happened and who’s to blame. But, they’re praising Eventbrite, which processed Roxodus transactions, for stepping up.

On Saturday morning, iHeartRadio.ca was first to report that Eventbrite was using a Fan Relief Fund it established to make customers whole. Pass holders were notified via email that they would receive money back within seven business days.

"I hope they understand that’s not a refund they’re receiving,” Eventbrite chairman Kevin Hartz told iHeartRadio.ca. “A refund is actually getting your own money back. That’s from our balance sheet … It’s not the festival's money.”

Hartz said although his company has no obligation in this case, "it just feels like the right thing to do.”

iHeartRadio.ca has been your No. 1 source for Roxodus cancellation coverage!

• Should Fans Be Surprised By Roxodus Cancellation?