Canadian musician Neil Peart, lyricist and drummer for Rush, died Tuesday in Santa Monica of brain cancer. He was 67.

Elliot Mintz, a spokesperson for Peart's family, confirmed the sad news on Friday, as did a rep for Rush. A tweet from the band explained Peart battled Glioblastoma – the same cancer that claimed The Tragically Hip's Gord Downie – for three-and-a-half years.

“We’ve lost a legend,” tweeted prime minister Justin Trudeau. “But his influence and legacy will live on forever in the hearts of music lovers in Canada and around the world. RIP Neil Peart.” 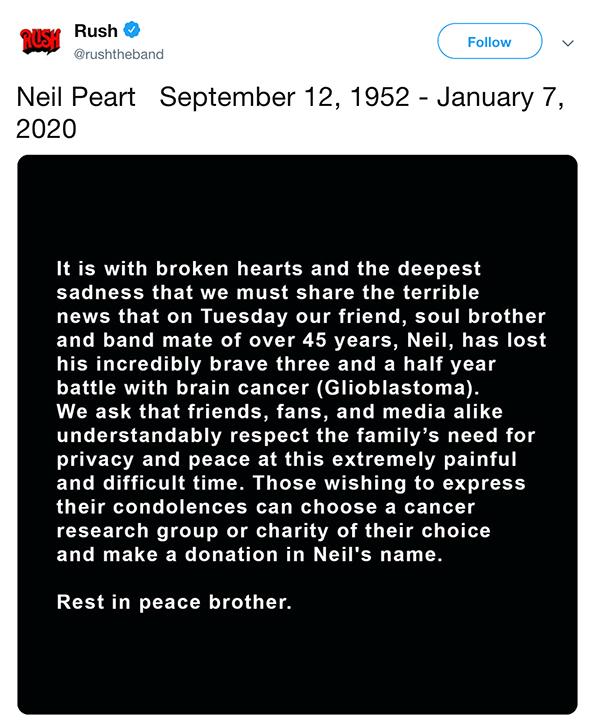 Tributes are pouring in on social media. Billy Talent drummer Jordan Hastings took to Instagram to say he was "absolutely gutted." He shared: "Arguably one of the most inspirational, unconventional and creative drummers of all time ... Thank you, you were my main inspiration to put down the guitar and focus on drums! And for that I can’t thank you enough. Rest easy."

Dave Grohl of Foo Fighters (and former Nirvana drummer) called Peart “a true giant in the history of rock & roll.” In a statement, he said Peart was “an inspiration to millions with an unmistakable sound who spawned generations of musicians (like myself) to pick up two sticks and chase a dream. A kind, thoughtful, brilliant man who ruled our radios and turntables not only with his drumming, but also his beautiful words.

“Thank you, Neil, for making our lives a better place with your music. You will be forever remembered and sorely missed by all of us.”

Heart's Nancy Wilson shared on Twitter: "What a immense talent and influence on the course of rock music for all time. He was such a magical cornerstone in the Temple of Rush. Rush is forever timeless."

In an Instagram tribute, Metallica drummer Lars Ulrich shared: “Thank you Neil. Thank you for inspiring me and for all your help and advice along the way, especially in the early days when you took the time to talk to a young green Danish drummer about recording, gear and the possibilities that lay ahead... Thank you for what you did for drummers all over the world with your passion, your approach, your principles and your unwavering commitment to the instrument! Rest In Peace.”

“His impact on rock history is indelible and his influence on drummers everywhere inescapable,” read a tweet from Nickelback.

Canadian singer Ron Sexsmith tweeted: "So sad to hear about Neil Peart I only got to meet him once but we were both St Catharines natives. Incredible drummer obviously but also, he gave RUSH their signature thought provoking lyrics. Huge Loss RIP." 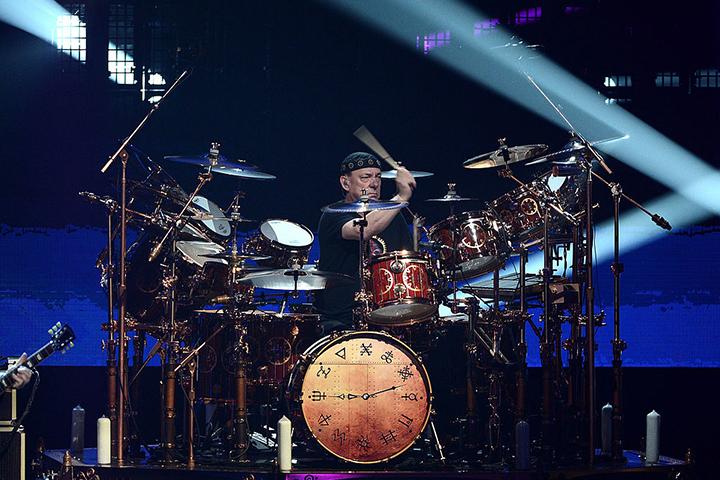 Peart was born on his family’s farm in Hagersville, near Hamilton, Ont., but raised in St. Catharines. He developed an early interest in music, specifically the drums. On his 14th birthday, his parents Glen and Betty gifted him with a drum kit and lessons.

Peart performed on community stages and played in local bands but couldn’t find steady work as a drummer in Canada. He moved to London, England when he was 18 – but found only a few gigs. Peart soon returned to Canada and helped his father sell tractor parts.

An opportunity to audition for a band called Rush came up after Geddy Lee and Alex Lifeson lost their drummer John Rutsey. Peart became a member of the band in July 1974 and played his first gig with Lee and Lifeson in Pittsburgh on Aug. 14, 1974.

He played on all but the first of Rush's 18 studio albums and was the trio's main lyricist.

"My natural exuberance is balanced by my natural reserve," he told journalist Brad Wheeler in a 2007 interview. "I love show-offy fills and all that stuff, but I never intrude on a vocal part. And I never would co-opt an instrumental section, saying 'I should solo here.' It's not the Canadian way."

In a 2017 interview with Classic Rock, Peart spoke about the importance of family.

“I love my job and I love the people that I work with. I am very grateful for that. But I also love my home and family,” he said. “Honestly, people don’t realize the sacrifice you make as a touring musician. Being away when children are growing up and when your partner needs you around, it’s wrenching. Your family and friends, their lives continue and you’re not part of them.

“People don’t place enough value on family life. It’s too easy to get caught up in the tedious day-to-day stuff and miss the miracle that’s unfolding before you.”

Suddenly, you were gone / from all the lives you left your mark upon / I learned your love for life / I feel the way that you would / I feel your presence I remember - from the Rush song “Afterimage”

Rush completed its final tour in August 2015 and, four months later, Peart announced his retirement from music. He told Classic Rock in 2017 how it feels to have inspired so many drummers.

"The highest possible compliment is if someone that you admire respects your work," he said. "To those that have said I inspired them to start drumming, the first thing I say is: 'I apologise to your parents.' But it’s wonderful just to be a little part of someone’s life like that."

Peart is survived by his wife Carrie Nuttal and daughter Olivia.

Listen to music from Rush