Taylor Swift was the top winner at Sunday's American Music Awards (AMAs), where winners are determined by fan voting.

"In the past few years I have released more music than I did in the entire decade preceding that and I really feel like that's down to the fact that you, the fans, made it clear that you wanted to hear lots of music that I would make. You encouraged me," she said while accepting Artist of the Year. "I found that the more music I made and the more music I put out, the happier I was ... so I have the fans to thank, essentially, for my happiness and I love you more than I can say.

"I cannot express how unbelievable it is to me that I still get to do this and that you still care. So 'thank you' underlined with 13 exclamation points. I don't know what to say. I love you."

"I cannot tell you how much my re-recorded albums mean to me," she said, "but I never expected or assumed that they would mean anything to you."

At the AMAs in 2013, the original Red took home Favourite Country Album and was nominated for Favourite Pop Album but lost to One Direction's Take Me Home.

Also on Sunday, Swift's "All Too Well: The Short Film" earned Favourite Music Video – the category she won for “Cardigan” in 2020 and “You Need to Calm Down” in 2019.

Dove Cameron was crowned Favourite New Artist. “Every award that I ever win will always first and foremost be dedicated to the queer community at large. You guys have carved out such a space for me to be myself and to write music about it and I’ve never felt safer or more loved and more supported and I hope I can give you some semblance of that same feeling in my music,” the 26-year-old said.

For the second year in a row, Machine Gun Kelly won the AMA for Favourite Rock Artist. After thanking his fans – and poking fun at his suit – MGK took aim at his haters.

“There have been some people in the rock community who called me a tourist but they’re wrong. I’m a rocket man,” he said. “We weren’t born on the moon but we looked at it, we were curious, and then we went there – supposedly – and these last two rock albums, to me, were me going to the moon.

“But I’m not done exploring the universe yet and I am all genres.” 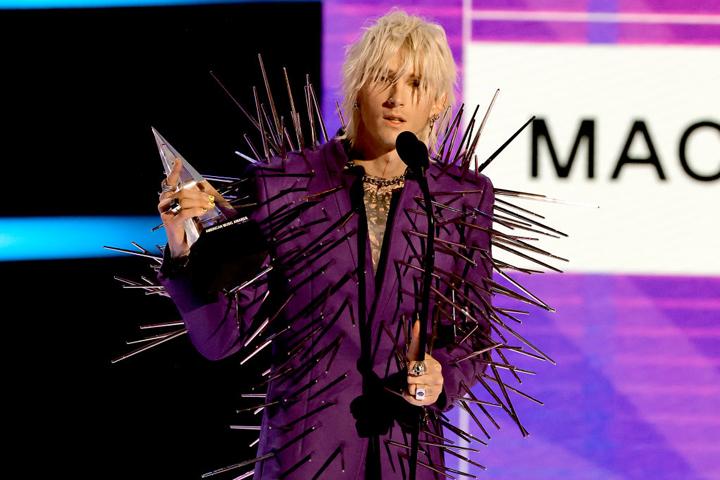 "As It Was" by Harry Styles was voted Favourite Pop Song and Styles won Favourite Male Pop Artist.

Presenter Kelly Rowland told the crowd to "chill out" after reading Chris Brown's name as winner of Favourite Male R&B Artist. "I wanted to tell Chris, thank you so much for making great R&B music," said Rowland, "and I want to tell him thank you for being an incredible performer."

Brown, who was not there to accept the award, claimed on Saturday that his tribute to the 40th anniversary of Michael Jackson's "Thriller" was cut from the AMAs without explanation.

Other winners announced ahead of the live broadcast include Kendrick Lamar for both Favourite Male Hip-Hop Artist and Hip-Hop Album (Mr. Morale & The Big Steppers). Nicki Minaj was chosen as Favourite Female Hip-Hop Artist. Not surprisingly, BTS was voted Favourite Pop Duo/Group and K-Pop Artist.

Canada was represented in the nominations by Drake (with six), The Weeknd (with five) and Justin Bieber (with one) – but only Drake’s name was called on Sunday night when Future’s “Wait For U” featuring he and Tems was voted Favourite Hip-Hop Song.

Winner are determined by fan votes from nominations based on “key fan interactions,” including streaming, sales, radio airplay and tour revenues in the year ending Sept. 22.

Sunday’s AMAs included performances by artists like Charlie Puth, Bebe Rexha, Imagine Dragons, P!NK and Lil Baby as well as a tribute to Lionel Richie, who will accept the Icon Award.

Check out the list of nominees and winners below.

Listen to music from AMAs winners