The 1975 are celebrating Pride Month by making a generous donation to a London LGBTQ Centre, to help the project reach their fundraising target.

“ANNOUNCEMENT: on Wednesday, I got a call from @Truman_Black – lead singer of The 1975. he called to say how important he and the band thought the @LdnLGBTQCentre project is, and asked how to help,” activist and project organizer Michael Segalov announced on Twitter on Sunday. “He offered to take crowdfunder to £50k [$86,405 CAD] there and then!” 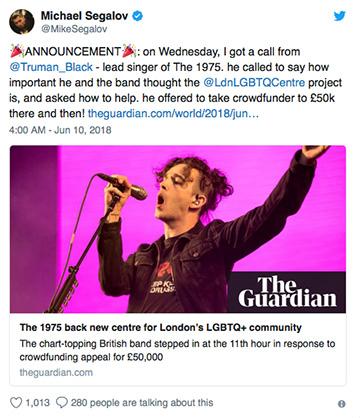 “With everyone’s incredible support, we managed to hit £50k without including their donation, which means right now we’re on course to raise £100k for this project. I want to say thank you to Matty, and the band, for their allyship to the LGBTQ+ community. it means the world,” Segalov added.

The 1975 frontman Matt Healy also commented to The Guardian: “You might wonder why it is needed, and even ask yourself what exactly is everyone still scared of, but sadly, I think stigma still exists even in London and we still have some way to go.

“Me and the others in the band all felt it was obviously a good thing to put our money towards.”

Healy added: “Aside from believing in the idea, a more superficial reason is that one of our songs, 'Loving Someone,' has become a bit of an anthem for some people in that community."

The 1975 are currently working on their third album, A Brief Inquiry into Online Relationships, which is expected to be released in October.