Gord Downie, lead singer of Canadian rock band The Tragically Hip, died Tuesday night after a battle with brain cancer. He was 53.

"Last night Gord quietly passed away with his beloved children and family close by," read a statement from the Downie family.

"Gord knew this day was coming – his response was to spend this precious time as he always had – making music, making memories, and expressing deep gratitude to his family and friends for a life well lived, often sealing it with a kiss... on the lips."

Prime Minister Justin Trudeau was among those paying tribute to Downie. "There will never be another one like you, Gord," he tweeted. "Rest in peace my friend." Later, in front of reporters, Trudeau was moved to tears. "We are less of a country without Gordon Downie," he said. "We all knew it was coming but we hoped it wasn’t. It hurts."

Ontario premier Kathleen Wynne tweeted: “I think I speak for all people in Ontario in saying we are heartbroken. With Gord Downie's passing a piece of Canada has died.”

The acclaimed singer-songwriter revealed his terminal diagnosis of glioblastoma in May 2016 – a diagnosis that came five months after he suffered a seizure.

“I think I got lucky," Downie told Peter Mansbridge in October 2016. "If it has to be terminal… I didn’t get hit by a train. It’s given me this long kind of way to do some of these things that I’ve always wanted to do. I’m grateful."

In the summer of 2016, The Tragically Hip – which also includes Paul Langlois, Rob Baker, Gord Sinclair and Johnny Fay – embarked on a cross-Canada tour “for Good, and for all of us.” Their last show with Downie was Aug. 20 in Kingston, Ont., where it all started.

Downie was born in Kingston and grew up in nearby Amherstview playing hockey and music.

At Queen's University, Downie's alma mater, flags were lowered to half-mast following news of his death.

The Tragically Hip was formed in 1984 and went on to become a decidedly Canadian success story. Downie and The Hip created songs like "Ahead by a Century," "Bobcaygeon," "New Orleans is Sinking" and "Little Bones." The band won 16 Juno Awards and were inducted into the Canadian Music Hall of Fame, Canada’s Walk of Fame and the Order of Canada.

In 1995, The Hip performed on Saturday Night Live, despite having very little commercial success south of the border.

During his life, Downie was an advocate for the environment and Indigenous rights.

In late 2016, he released Secret Path, a multimedia project that told the story of an Ojibwe First Nations boy who fled a residential school and died of exposure and hunger.

Another solo collection, Introduce Yourself, is set for release on Oct. 27.

“We're a country that hasn't really embraced its history just yet. We're still trying to figure out what makes us Canadian, and we have one of the loudest neighbors in the world, so this band helped a country, and Gord helped people lyrically, slowly start to try to define themselves," Broken Social Scene's Kevin Drew told The New York Times in 2016.

Toronto's Sunnybrook Hospital said in a tweet that Downie's legacy extends beyond his music. "He raised unprecedented awareness for glioblastoma. Our condolences to his family & friends."

In the same interview, Downie joked that he told his wife he wanted to be buried with his forest-green Batavus bicycle.

Asked by Mansbridge what scares him, Downie replied: "I don’t want to die... That really scares me. Obviously."

His family said it is grateful "for all the respect, admiration and love you have given Gord throughout the years – those tender offerings touched his heart and he takes them with him now as he walks among the stars." 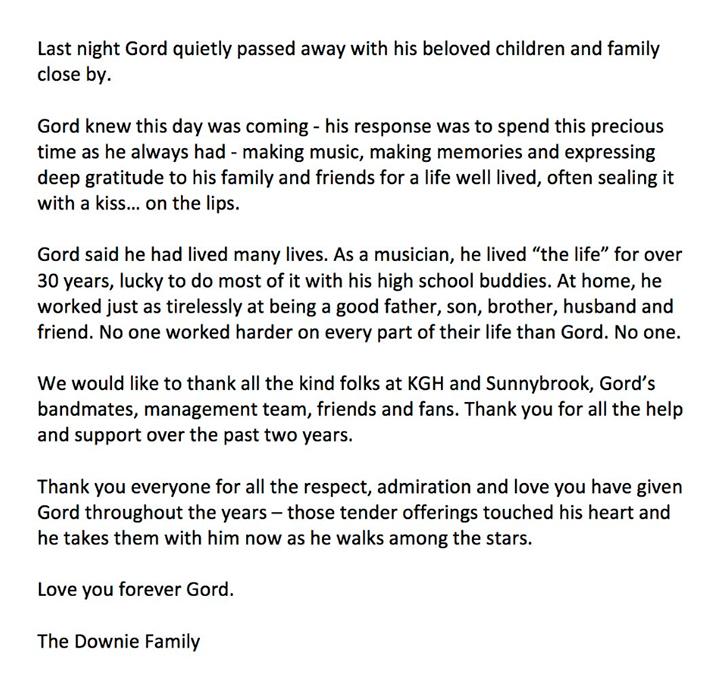