Tributes Pour In For Rapper Juice WRLD, Dead At 21

Juice WRLD died Sunday morning – just six days after his 21st birthday – after reportedly suffering a seizure at an airport in his native Chicago.

The rapper, whose real name is Jarad Higgins, was walking through the Atlantic Aviation hangar at Midway airport after arriving on a private jet from Los Angeles when the seizure happened. According to TMZ , he was bleeding from the mouth by the time paramedics got to him.

Chicago Fire Department said Juice had gone into "cardiac arrest" and was rushed to hospital, where he was pronounced dead at around 3:15 a.m. The Cook County Medical Examiner’s Office said an autopsy will be conducted Monday.

A cause of death was not immediately known but foul play is not suspected.

Juice's final Instagram post, on Dec. 3, was a photo of himself with friends on a boat in Sydney, Australia. "Yesterday was my actual bday," he captioned it. "im celebrating all week doe."

In a statement, the rapper-singer's record company Interscope Geffen A&M Records said: “Juice made a profound impact on the world in such a short period of time. He was a gentle soul, whose creativity knew no bounds, an exceptional human being and artist who loved and cared for his fans above everything else. To lose someone so kind and so close to our hearts is devastating. Our thoughts are with Juice’s family and friends, everyone at his label Grade A, and his millions of fans around the world.”

"I would like to see all the younger talent live longer and I hate waking up hearing another story filled with blessings was cut short." - Drake

A spokesperson for Homewood-Flossmoor Community High School, from where he graduated in 2017, told local station WGN: "He is remembered by his teachers and staff as being a brilliant and creative student. Jared was extraordinarily talented in music and played many instruments. He was a caring and outgoing person who always tried to reach out to others while at the same time he was introspective and had a great sense of humour."

"I can’t believe it... you were such a sweet soul," tweeted Ellie Goulding, who recorded "Hate Me" with Juice. "I’ll always remember meeting you and your family on the video set and thinking how close you were. You had so much further to go, you were just getting started."

Canadian comic Tom Green tweeted that he was "devastated to hear of the death of one of my favourite artists of the last 10 years ... you  brought such incredible music to the world in your short life."

Juice had been open about using Percocet and Xanax when he was younger. In a 2018 interview with Atlanta radio station Hot 107.9, he spoke about doing "lean" – a mix of cough syrup and soda and hard candy – since he was in the 6th grade.

“It’s not as easy as seeing somebody die and being like ‘Oh my God, that’s a wake up call, I’m going to stop,'" he said. "It’ll make you think like ‘Damn, I don’t want that to happen to me.’ But at the same time you’re already addicted. Your body is screaming for that s**t.”

In an interview with XXL published in October, Juice said he quit drinking lean in July because “it just wasn’t healthy” but he was still vaping and using marijuana. “People really be dying off these things,” he said. “I’m tryna avoid that.” 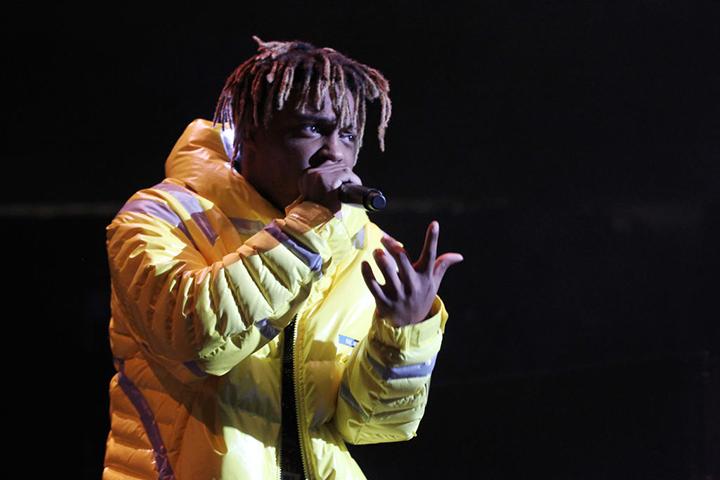 As JuicetheKidd on SoundCloud, he self-released the mixtape What Is Love? in 2015 followed by the EP Juiced Up a year later. Several EPs followed – Affliction, Heartbroken in Hollywood, 9 9 9, BingeDrinkingMusic and Nothings Different – in 2017.

His major label debuts were EPs Too Soon and Up Next Session: Juice Wrld in 2018 followed by the mixtape Wrld on Drugs with Future. His first studio album, 2018’s Goodbye & Good Riddance peaked at No. 5 in Canada thanks in part to Juice’s breakthrough hit “Lucid Dreams.”

Juice’s sophomore album, Death Race for Love, went to No. 1 in both Canada and the U.S.

He was also featured on a number of tracks with artists like Travis Scott (“No Bystanders”) and Kodak Black (“MoshPit”) and on a remix of Halsey’s “Without Me.”

"Dude. This is ridiculous. Millions of people, not just in Chicago but around the world are hurting because of this and don’t know what to make of it. Im sorry. Love you and God bless your soul." - Chance The Rapper

The rap star, who finished an Australian tour on Nov. 29, performed for what would the last time on Nov. 30 at the Spilt Milk festival in Victoria, Australia. He was scheduled to be one of the headliners at the Rolling Loud festival in Los Angeles on Dec. 14.

Juice performed several times in Canada. He did shows with Ski Mask The Slump God in Vancouver this past April and in Toronto in May (he also played Toronto in October 2018). Juice was back in Canada in July to perform at the Cowboys Music Festival in Calgary.

Ski Mask The Slump God shared on Instagram: "I Love You So Much , You Didn’t Deserve This , I Cant Explain How Much It Hurts Me To Lose You , F**k This Life Bruh , Rest In Peace You Know I’ll Carry Your Energy Forever !!!!!!!! I Can’t Lose Any More Brothers."

In February, Interview published a conversation between Juice and Canadian singer Avril Lavigne, in which he spoke about losing friends.

“When you’re in the moment, and you think you have good friends, you kind of assume you’re going to die next to your friends when you’re in your nineties,” he said. “But then a lot of people switch it up, and that part is the biggest heartbreak.”

Juice also talked to Lavigne about being open about his drug use.

“In order to take somebody out of the dark place they’re in, you need to be in that dark place with them,” he said., “Like, there’s a lot of hard drug use that’s public nowadays, so I’ll just take my demons and put them out there. It’s not going to work if you point fingers and say that somebody’s addicted to something. Somebody who has never done it can’t sit there and be like, ‘You’re stupid, you need to stop.’

"They don’t know what people go through, because everybody has different struggles. People have gone through horrific things in their lives, and sometimes their escape is drugs. So I speak from the perspective of saying, 'You are not alone. I’m fighting this fight with you, so just know that I’m here.’”

In his October XXL interview, Juice said he was hoping to achieve more than fame and fortune during his life.

Listen to music from Juice WRLD