Bono and the Edge of U2 were in Ukraine on Sunday for a very special concert.

The musicians performed some of the band’s biggest hits inside Kyiv’s Khreshchatyk metro station, one of many that has served as a bomb shelter during the Russian offensive.

“President [Volodymyr Zelenskyy] invited us to perform in Kyiv as a show of solidarity with the Ukrainian people,” they tweeted, “and so that’s what we’ve come to do.”

Bono praised Zelenskyy. “Your president leads the world in the cause of freedom right now,” he said. “The people of Ukraine are not just fighting for your own freedom, you’re fighting for all of us who love freedom.”

U2 playing a show at Kryschatek metro station now.. pic.twitter.com/plBTNmwoZP

When the night has come…

Bono and U2 are performing at Khreshchatyk subway station in #Kyiv 💙💛 pic.twitter.com/XmVniIGvcH

Bono also customized some of the lyrics in 1984’s “Pride (In The Name Of Love).” He sang:  “This evening, 8th of May / Shots will ring out in the Ukraine sky / but you’ll be free at last / They can take your lives / but they can never take your pride.”

Bono and the Edge were joined by singer Taras Topola of Ukrainian band Antytila – who signed up to defend their country as soldiers – for a rendition of the Ben E. King classic “Stand By Me.”

Later, the musicians visited the site of a mass grave in Bucha and toured some of the destruction in the town of Irpin. 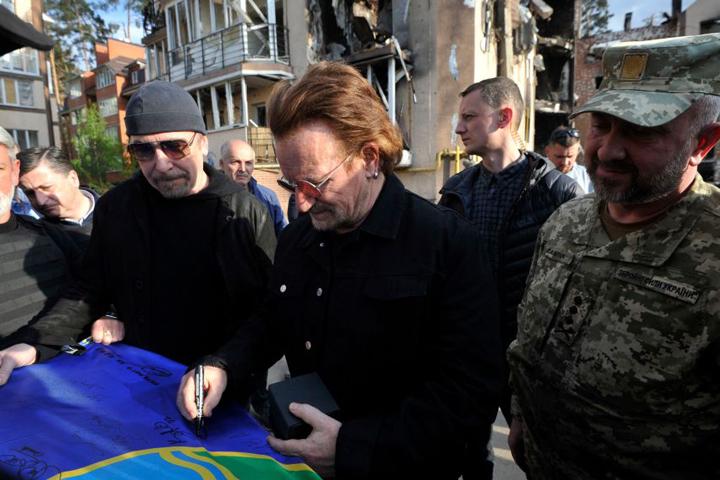 The Edge and Bono sign a flag while in the town of Irpin. Sergei Chuzavkov / AFP/Getty Images

Listen to music from U2