Bell Media pulled Jessica Mulroney's reality series ``I Do, Redo'' off the air Thursday after the celebrity stylist was accused by Sasha Exeter of threatening the Toronto lifestyle influencer's career and trying to ``silence a Black woman'' during the anti-Black racism movement.

Exeter said in an Instagram video Wednesday that the dispute started when she put out a call on social media for her peers to use their platform to support Black voices.

Exeter said Mulroney, who had not been speaking up about the movement on social media at that time, mistook her call to action for a personal attack and threatened her in writing last week.

Exeter accused Mulroney of lashing out at her several times since then, including a claim that she was speaking with companies about Exeter's behaviour, which could jeopardize any potential brand partnerships.

``That's a threat to my livelihood _ and for her to threaten me, a single mom, a single Black mom, during a racial pandemic blows my mind,'' said Exeter, who used to be an acquaintance of Mulroney's. ``It's absolutely unbelievable.''

The media company issued a statement Thursday saying it had removed Mulroney's show, which recently launched its first season, from all of its platforms.

``Bell Media and CTV encourages our entire team including our on-air talent to practice respect, inclusivity, and allyship as we pledge to work better and more openly to listen to and amplify Black voices, and not to minimize them,'' it said.

``Because recent conduct by one of our shows hosts, Jessica Mulroney, conflicts with our commitment to diversity and equality, CTV has removed 'I Do, Redo' from all Bell Media channels and platforms effective immediately.'' 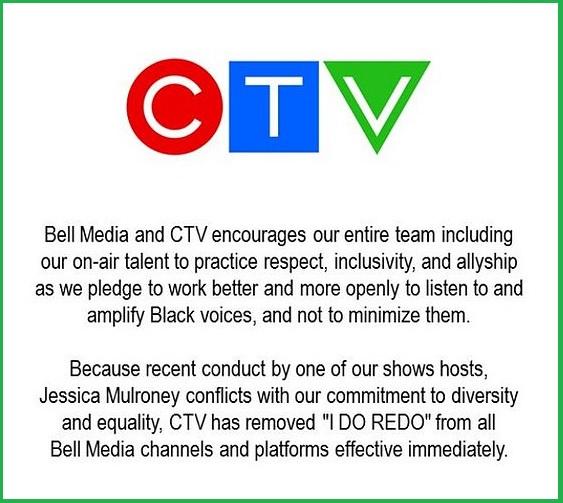 In a post on her Instagram story Thursday, Mulroney said she respected CTV's decision and has decided to step away from her professional engagements at this time to reflect, learn and focus on her family.

``The events that have transpired over the last few days have made it clear that I have work to do,'' she said in a written statement.

``I realize more than ever how being a white, privileged woman has put me far ahead of so many, and in particular those in the Black community. And while I can't change the past, I can do my part to do better in the future.''

Exeter said Thursday on Instagram that Mulroney threatened her with a lawsuit in reaction to her publicly revealing their dispute.

Mulroney later clarified on the same platform she has no intention of pursuing any legal action against Exeter, noting: ``I was wrong, and for that I am truly sorry.''

Mulroney, who is known for being friends with Meghan, the Duchess of Sussex, also apologized for what she called a ``disagreement'' that ``got out of hand.'' 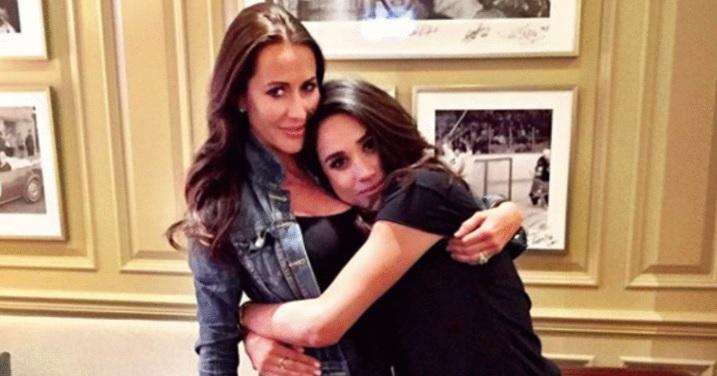 She said she was wrong to take Exeter's initial call-out personally and she ``did not intend in any way to jeopardize her livelihood.''

Mulroney added that she plans to step ``back from social media in the coming days'' to reflect and give her ``microphone to Black voices'' by having them take over her account.

``I remain more committed than ever to support anti-racism efforts and will do everything in my power to right this wrong,'' Mulroney wrote.

Exeter is a former elite athlete who now works as a global brand marketer and entrepreneur. She writes about fitness, lifestyle and parenting on her website So Sasha. 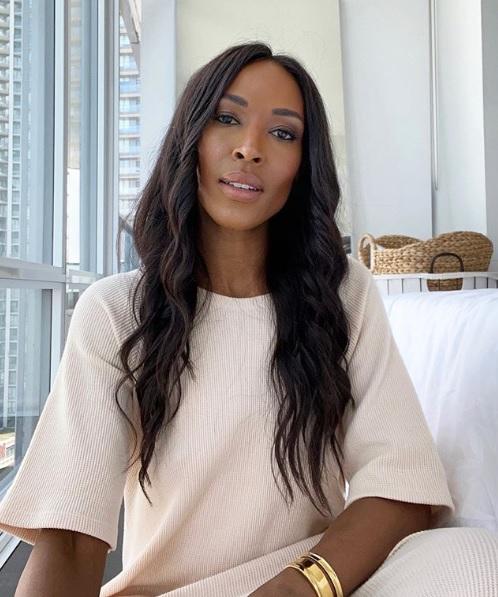 ``Listen, I am by no means calling Jess a racist but what I will say is this: She is very well aware of her wealth, her perceived power and privilege because of the colour of her skin,'' Exeter said in her Instagram post Wednesday.

``And that, my friends, gave her the momentary confidence to come for my livelihood in writing. Textbook white privilege, really, in my personal opinion.''

Neither Mulroney nor Exeter could be immediately reached for comment Thursday evening.

Mulroney, who is married to TV personality and former prime minister's son Ben Mulroney, catapulted to global fame in 2018 when she was among the guests at Prince Harry and Meghan's lavish nuptials.

A descendant of shoe magnate Morton Brownstein of the Browns Shoes empire, she has been a marketing consultant for the Toronto outpost of Kleinfeld Bridal and appeared regularly on City TV's ``Cityline.''

``Cityline'' said Thursday that Mulroney will no longer be appearing as a guest expert on the show.

And Hudson's Bay said she'll no longer represent the company or Kleinfeld Canada as a fashion and bridal specialist.

``I Do, Redo,'' a CTV original series, saw Mulroney giving couples another chance at a wedding after their original nuptials were ruined by circumstances beyond their control.