A midnight deadline to clear a rail blockade on Tyendinaga Mohawk territory outside Belleville has come and gone with no movement by protesters or provincial police.

According to a video shared by a Mohawk news service, OPP told protesters CN would not criminal pursue charges if they cleared the area of people, vehicles, and structures by 11:59 p.m. Sunday.

In the minutes before the deadline, protesters did not leave but instead shot off fireworks, sped along the train tracks in vehicles, honking horns and blaring Nirvana's 'Smells Like Teen Spirit'.

The barricade in Tyendinaga and others are a response to a move by the RCMP to clear protesters who had been blocking access to a Coastal GasLink natural gas pipeline worksite on Wet'suwet'en territory in northern British Columbia.

In the early hours of Monday, Mohawk protesters released a statement revealing that the Minister of Indigenous Services would soon confirm that Mounties had withdrawn from Wet'suwet'en land. 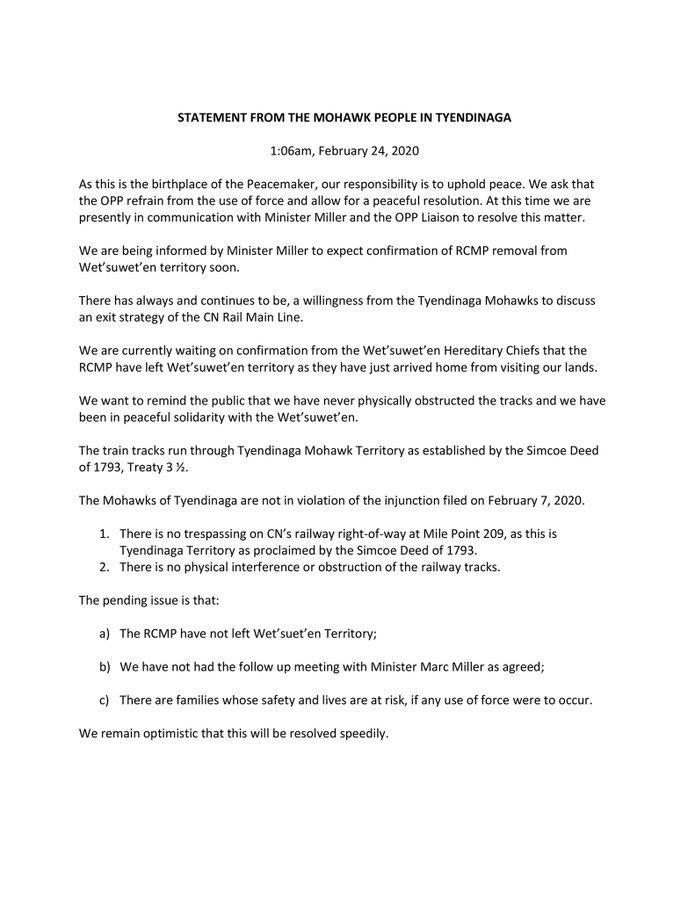 "They're waiting on that (confirmation) to come through, and they're just hoping that everybody stands down and nothing erupts and no violence occurs because everyone is very close to a resolution," Singh told NEWSTALK 1010 early Monday.

Marc Miller's office has not corroborated the Mohawk peoples' claim.

On Friday, the Prime Minister called the rail blockades "unacceptable and untenable'' and said they must come down.

But a hereditary chief from the Wet'suwet'en Nation said Justin Trudeau's words had the opposite effect.

Chief Na'moks, also known as John Ridsdale, says talks were progressing with the Mohawks until Trudeau made his "antagonistic" speech.

"It would have ended Friday if the Prime Minister had not made that speech," Ridsdale told the Canadian Press Sunday. "The Mohawks would have taken everything. They were ready. We were on the phone, the other line was busy with the Mohawk but then he made his speech and the Mohawk said 'no, we're keeping everything up'."

with files from the Canadian Press