It's a warning that would give anyone chills and put you into panic mode.

Fortunately, an emergency alert sent out across Ontario this morning, advising of some sort of unspecified accident at Pickering Nuclear Plant, was a false alarm.

While there are still more questions than answers, about the mishap, NEWSTALK1010 has learned that it was reportedly meant to be an internal "test" message during a training drill, but that somehow, it went live across the province just before 7:30 this morning.

Kilgour says that authorities scrambled to retract the warning once they verified it was a false alarm, adding "I cannot confirm how the province issued it."

Ontario Power Generation tweeted out a correction some time after the initial alert went out, saying in part, that it was "sent in error" and that "there is no danger to the public and environment" but they've offered no further explanation.

"What I can tell you is that the investigation is underway and as we get more information, we'll pass it along," said a spokesperon with OPG.

Pickering mayor David Ryan wants answers too, as to how this could have happened. He found out about it from a constituent.

"I actually got a call from a resident. I didn't get the alert on my phone, which is another one of the situations that we want to look into," says Ryan.

He's not alone on that.  Many residents across the province didn't get the alert on their phones either.

Mayor Ryan has already asked the provincial government to investigate what went wrong and how to make sure it never happens again.

Meanwhile, Solicitor General Sylvia Jones says an investigation is underway.  Her office has released a statement in response to the Pickering Nuclear Generating Station emergency alert:

There was no incident at the Pickering Nuclear Generating Station that should have triggered public notification. Nor was there ever any danger to the public or environment.

Emergency exercises are a critical component of ensuring preparedness for emergency management and response agencies. The PEOC conducts training exercises regularly and there was no intention to notify the public in this instance.

The Government of Ontario sincerely apologizes for raising public concern and has begun a full investigation to determine how this error happened and will take the appropriate steps to ensure this doesn't happen again.

And the Ontario Power Generation released a statement indicating there was never any malfunction and things are running normally at the plant: 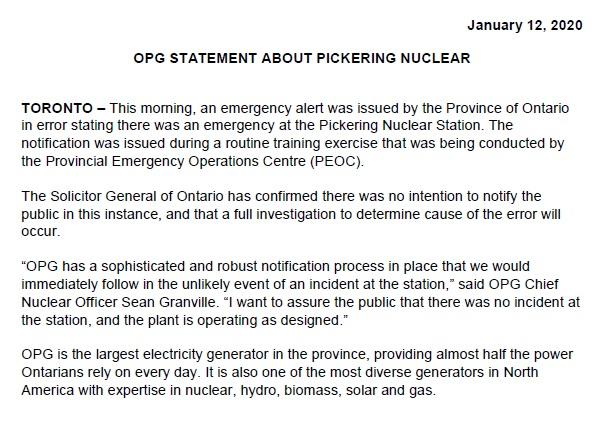