EXCLUSIVE: Don Cherry speaks to NEWSTALK 1010 after being fired

Hours after he was fired by Rogers Sportsnet from his Coach's Corner segment on Hockey Night in Canada, Don Cherry broke his silence.

In an exclusive interview with NEWSTALK 1010, Cherry joined Barb Digiulio on the Nightside Monday night.

Cherry was terminated after a 37-year run on HNIC, following comments he made last Saturday when he singled out new immigrants in Toronto and Mississauga, where he lives, for not wearing poppies.

Digiulio quickly asked him if he wanted to clarify his remarks.

"I did not mean that. What I did mean everybody, not just the people that think it. Once you say your people, you people, you know you're in trouble and that's exactly what happened."

He added it would take a bit of time to get used to not working and being part of the broadcast.

"It's kind of strange to be unemployed, halfway through the season and of all days Remembrance Day, it's sad."

Cherry admitted he only found out about the backlash for the segment Sunday and that he has also received plenty of support and could have kept his job with an apology or two.

"I could have stayed on if I wanted to and knuckled under and turned into a simp. But that's not my style, I'd rather go out on my shield."

But an apology that many, including Cherry, believe threw him under the preverbial bus.

Cherry told Digiulio he will miss working Saturday nights and the NHL playoffs and will kick back with a beer or two this coming Saturday to see who his replacement will be.

with files from The Canadian Press 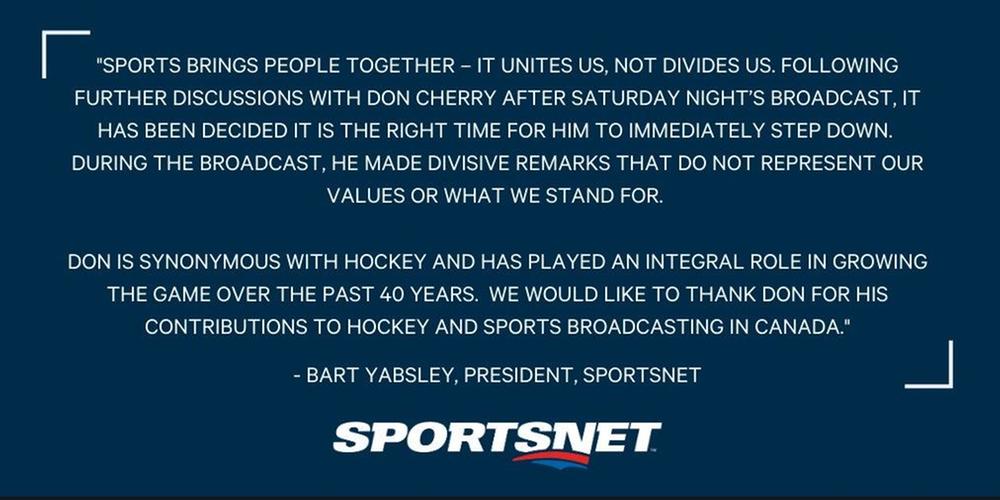