The two men arrested this week in connection to the gang-related shooting that killed an innocent 12-year-old boy out shopping with his mother, are now facing first-degree murder charges.

Initially, both Rashawn Chambers, 24, and Jahwayne Smart, 25, faced 28 charges each, but after the boy died, Chambers is now at 30 and Smart at 29.

It was Saturday afternoon around 2:20 p.m. when two men got out of a car at a parking lot just north of Jane St. and Finch Avenue and opened fire on another vehicle with five people inside.

Three inside the car, all 17 years old, suffered various injuries and eventually released from hospital, while a stray bullet hit the boy across the street.

"The two accused planned to carry out murder," Fernandes said. "The fact that the 12-year-old was not an intented target is not a piece of that, he was hit as these men were attempting to carry out their plan to murder someone." 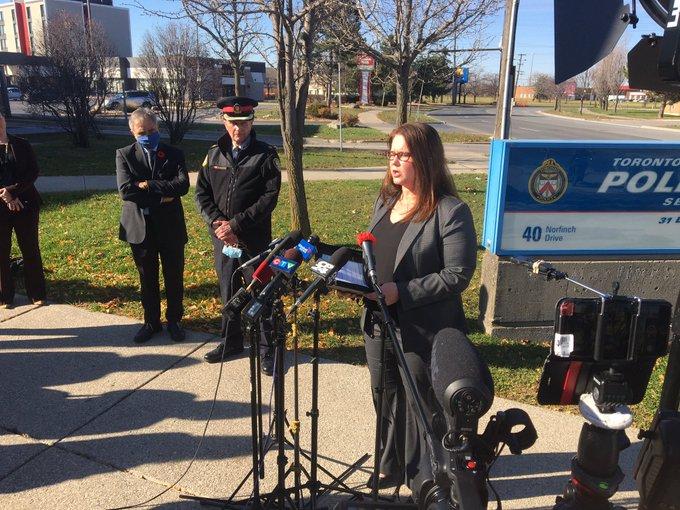 Fernandes also gave new informaiton that they are searching for a third person, believed to be the getaway driver.

"He would be facing also the charge of first-degree murder," Fernandes said, also confirming Smart had a parole violation.

The arrest happened two days after the shooting at a Canadian Tire at Bay and Dundas, when officers used CCTV footage to track down the path of the suspects and pounced on them when they came out of the store.

"The officers saw the opportunity to take those suspects safely out with minimal risk to the public and they decided to at that point," she said.

The issue has underlined various conversations, calls and debates between officials at all levels of government and activists over police funding, stricter parole rules and youth intervention programs.

"It's a very heartbreaking, emotional situation," he said. "The fact of people being on parole and being wanted for various things, to me it's outrageous that these people were not already in custody and behind bars."