Ontario Premier Doug Ford says his new plan to fast-track housing on lands acquired for new transit stations won't compromise due diligence, but insists red tape has to be cut to reinvigorate the economy.

"We aren't going to take any short-cuts," he said about a new bill that'll be tabled Tuesday. "But we're going to do it much quicker than the typical way government does business."

Ford has committed to going forward with his nearly $29 billion transit plan, including new subways like the Ontario Line, despite the province going deeper debt and lower transit volumes because of the COVID-19 pandemic.

The legislation proposed to build new housing units, such as badly needed affordable housing ones, on land purchased for the new transit stations, while exempting the projects from the normal Hearing of Necessity.

The hearings allow landowners to express their concerns about expropriation, though they're not binding and expropriation can go forward even if an inquiry officer rules in favour of an owner against the government.

The government says exempting projects could remove five months of delay for transit projects, as they'll also enter into new commercial agreements with developers, off-setting some of the costs that taxpayers would have to foot onto the private sector builders.

While the official opposition supports transit-oriented development, the concern is the handing over of land to private interests.

"I worry that this legislation is cover for Ford to help his developer buddies pad their pockets instead of delivering what Ontario so desperately needs: homes people can afford and transit. Ford delayed transit by years when he ripped up existing plans and went back to the drawing board," transit critic Jessica Bell said. 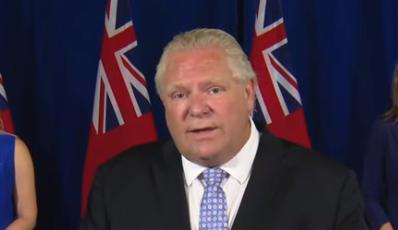 The province points out that that York Region and the City of Toronto are on side with the plan, with Transportation Minister Caroline Mulroney stating it'll create thousands of jobs to get the economy back on track.

"We will always treat people fairly and appropriately compensate owners, tenants and others who are impacted by these projects," Mulroney said. "But if we want to get shovels in the ground quickly, we need fast access to land to prepare construction sites, while balancing the rights of property owners."

Last week, Health Minister Christine Elliott said the province needed another week of Stage 2 data before the provincial health table would get into decisions about potentially moving on the third and final stage of Ontario's economic reopening.

Elliott said Monday that with roughly another week of that data in, health officials are reviewing it.

"I can't name a specific date, but I can tell you that the team is actively looking at the data and looking to move into Stage 3 as soon as we possibly can," she said.

The latest provincial data reports 154 new COVID-19 cases, but for the first time since March 31st, no new deaths as a result.

As for the only areas remaining in Stage 1 - Leamington and Kingsville in Windsor-Essex - Ford announced they'd be able to move into Stage 2 Tuesday.

"Community transmission is low and we have the resources for testing and contact tracing," he said.

The region has been kept behind in reopening because of outbreaks of migrant farm workers, which led to emergency assessment teams being sent to farms this weekend.

The health unit in the area ordered a work stoppage at one farm, after 191 workers tested positive for COVID-19 over late last month.

Some frontline health workers have continued to say they haven't received their promised pandemic pay, with some telling NEWSTALK1010 they're concerned about using their names out of fear of retribution from their employers.

The pandemic pay system works with the government providing funding to the employers through various ministries, which is then administered by the employers to workers.

Premier Ford said he had looked into the issue recently with the Treasury Board and that 80 to 90 per cent of the money had flowed from the government to those various employers (2,000 representing over 375,000 employees.)

But he declined to say how much responsibility the government bares for the delays, as well as how much the employers are responsible for.

"The money has flowed from here and I'll follow up again to see even if there's 10 per cent left that hasn't flowed and if that's the case, we'll make sure it flows," he said.