Ontario Premier Doug Ford doesn't want to be right when it comes to the prospect of a second COVID-19 wave in Ontario.

"I believe it's coming as sure I'm standing here and I hope to God I'm wrong, I'd love to be up here a month later and say I was wrong, but it's coming, we don't see a spike like this so quickly," he said Monday at Queen's Park, as MPPs returned to the Legislature.

Ford spoke after news that Ontario has recorded 313 new cases, a three-month high, with active cases up over 2,000.

Ford and his health officials report the numbers are being driven by people breaking physical distancing rules at social gatherings, with other recent outbreaks being reported at weddings and strip clubs.

Health officials have warned that community transmission has to remain low in order for school reopening to be as safe as possible, as some Toronto schools opened today.

"We're going to hit some bumps, but we're ready for it."

Ford announced the government will release its fall preparedness plan this week, with Health Minister Christine Elliott explaining they've been working on it for months, focused on three modeling scenarios.

"One is just small surges, small up and own, others are more peaks and valleys and the third, the one that is causing us greatest concern is the sudden, very big peak, so we're prepared for the worst," she said. "We will be rolling that out very shortly, but we are making plans and we have been getting organized for this for several months now."

Elliott says they are working to avoid delaying cancer and cardiac surgeries like they did in the spring and any move to bringing back economic or social restrictions would be made on a regional basis.

Ford added he's looking for more illustrative explanations of how the virus is spreading.

For example, the Windsor Essex County Health Unit recently published one chart showing how a Tim Horton's, a gym and various family gatherings all connected dozens of cases. 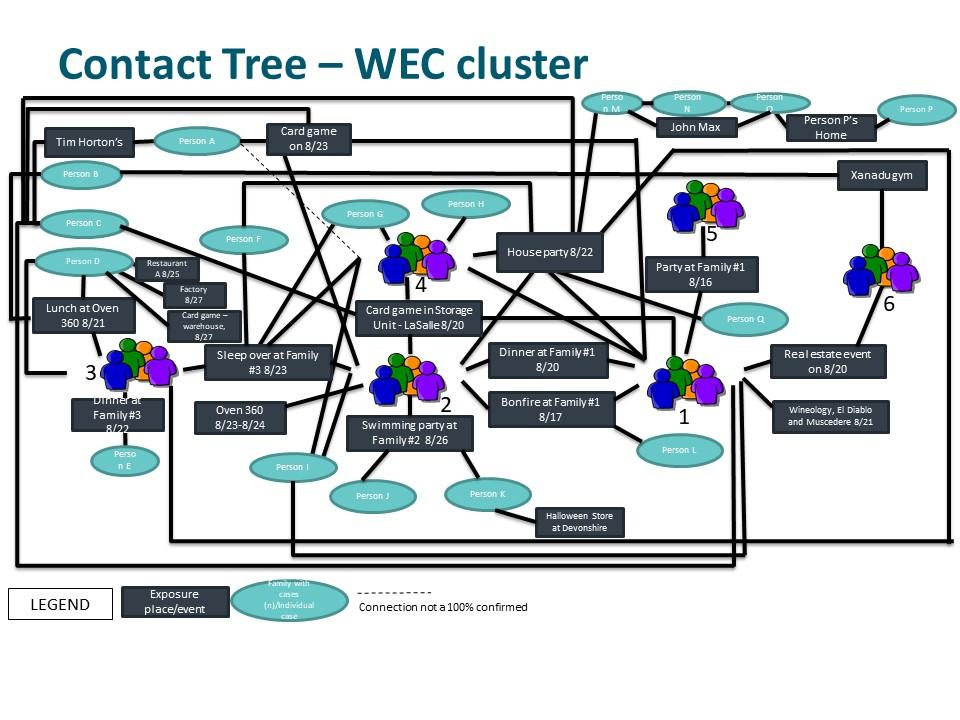 The premier says he's requested the same type of graphic.

"I'm all over it," he said. "We need to see the graphs, the graphs are being prepared, I'd be more than happy to make those public as well, as soon as I get them, the people will see them."

Ford's comments came the same day that some Toronto schools began the school year, with more opening their doors throughout the week.

However, the virtual side was dealt another blow as the Toronto District School Board announced late in the day that because of a sharp increase in families opting for online learning, the start of those classes was delayed from this Thursday to next Tuesday.

"Between Tuesday of last week and today, we have gone from approximately 66,000 students to more than 72,000 students in the Virtual School resulting in the addition of more than 200 virtual classrooms — all requiring a teacher," the board said in a statement.

The move does not apply to pending physical classes, though Education Minister Stephen Lecce was asked if it's safe that some classes are projecting students of up over 33 children to start the year.

"We are seeing classroom sizes come down," Lecce said, adding in the TDSB, schools in high-risk communities have caps of K-3 of 15 students and 20 students from grades 4 to 8.

But Lecce acknowledged that some classes are seeing too many and said the hope is that as parents make final decisions on where their children will go, boards will be able to adjust.

"It's important context for families to understand and the absence of knowing the full quantum of kids in the class, school boards are essentially consolidating classes to make up for those unknown numbers and until we get the full clarity of numbers of kids that will be in the class, the school boards will then reconstitute those classrooms, spread them out, hire more educators and ultimately reduce classroom sizes," he said.

In a statement, the ministry said based on the additional funding provided for staffing, up to 2,500 educators are expected to be hired as a result, although "we won't be able to validate exact numbers until school boards report their revised estimates information mid-December to the Ministry."

NDP Leader Andrea Horwath said she doesn't blame parents now in a scramble to move their children out of class and into online learning, saying issues with class sizes, a bus driver shortage and teachers not even having their assignments yet are due to the Ford Government mismanaging the return to school.

"The government had all summer long to figure out how to do that safely and when everybody else is distancing, to not put in a plan that allowed for social distancing in the classrooms where there was a minimum of two metres in between students is shameful," she said. "When the (funding) numbers get spread across the hundreds of thousands of schools across the province, they don't add up."