As parents around Ontario wait to find out what will happen with schools later today, the top doctor in one of the province's hot zones didn't wait.

Chief Medical Officer of Health Dr. Wajid Ahmed announced Thursday morning that while he hoped direction would come from the province to extend online learning, he would make the recommendation himself if Queen's Park didn't.

"Bottom line is for Monday, whether the province do it or whether I do it, it will be an online learning model for our community," he said, adding it would go into effect until January 23rd.

Windsor-Essex, along with Toronto, Peel and York has been one of the hardest zones throughout the pandemic in the province, especially with the outbreaks among migrant farm workers earlier on during the crisis.

Ahmed acknowledged the strain this will put on families.

"While there is no doubt in my mind or in any of my team's mind that in-person learning is critical for the developing mind, but we cannot jeopardize the safety of our children, given the data that we're seeing in our community," he said, while adding in-person instruction for students with special needs will continue.

The region went into school closures on December 11th, but since then, cases among school-aged children spiked considerably.

In the month of November when there was below 150 cases among school-aged children, more than half of the cases came from household contacts.

But in December when cases among school-aged children surged despite schools closing, nearly all were linked to household contact.

"If we kept the schools open, you can imagine that if we go with the same numbers with what we have seen in November, how that would've impacted our school system," he said.

The current age group with the highest per cent positivity rate is kids aged 9 to 13, which hit 35 per cent this month. 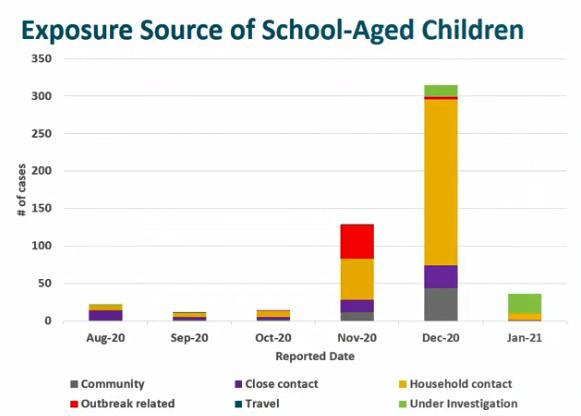 "Before the Christmas holidays, we saw positivity rates of three per cent," Ford said. "Now the information I received as of late yesterday afternoon, that has jumped 116 per cent, I'm going to repeat that, 116 per cent."

More specifically, CTV reported the 116 per cent figure was the jump for children aged between four and 11 by the week of December 27th, to an overall rate of almost 16 per cent.

The positivity rate for children aged 12 and 13 is nearly 20 per cent, the report said and Ford confirmed.

"One in every five children under the age of 13, they're testing positive, that's not mentioning all the other kids that haven't been tested," he said. "I will never, ever put our kids in jeopardy."

Ford said the before and after numbers were proof that Ontario's back to school plan was working during the year, but the holiday jump has been significant.