Ontario Finance Minister Rod Phillips has apologized for traveling outside Canada this month following the end of the recent legislative session, despite the ongoing federal advisory against non-essential travel and concern from Ontario's own chief medical officer of health shortly before he left the country.

​"I deeply regret travelling over the holidays. It was a mistake and I apologize," Phillips said in a statement Tuesday evening. "I left on a personally paid for trip to St. Barts on December 13 following the end of the Legislative Session.

"I am making arrangements to return to Ontario immediately and will begin a 14 day quarantine as soon as I arrive.”

The comments come after revelations earlier in the day that Phillips left the country for a "previously planned personal trip" after the legislative session ended on December 8th.

Initially, Phillips' office declined to say where he went and whether he had returned.

"Had I been aware then of the eventual December 26th Province wide shutdown, we would have canceled the trip," his original statement said.  "I have continued my work daily as the Minister of Finance and MPP for Ajax including dozens of digital Ministry, constituency and cabinet committee calls and meetings.

His office later confirmed to NEWSTALK1010 that he had not yet returned to the country.

However, it appears that Phillips will remain in his high-profile cabinet post.

"I have let the minister know that his decision to travel is completely unacceptable and that it will not be tolerated again — by him or any member of our cabinet and caucus. I have also told the minister I need him back in the country immediately.

The only way we will beat COVID-19 is by following the advice provided by our public health experts. Public officials are no exception."

​Ford's office adds the premier wasn't aware of Phillips' trip until after he had left the country.

NEWSTALK1010 also learned Phillips left the country in August as well before lockdowns were in place and that he quarantined for 14 days upon arrival, though his office is not providing details on where he went or how long.

There are various social media posts the week of December 14th, such as Phillips in front of his home, however NEWSTALK1010 is told they are older pictures to coincide with the content of the posts. 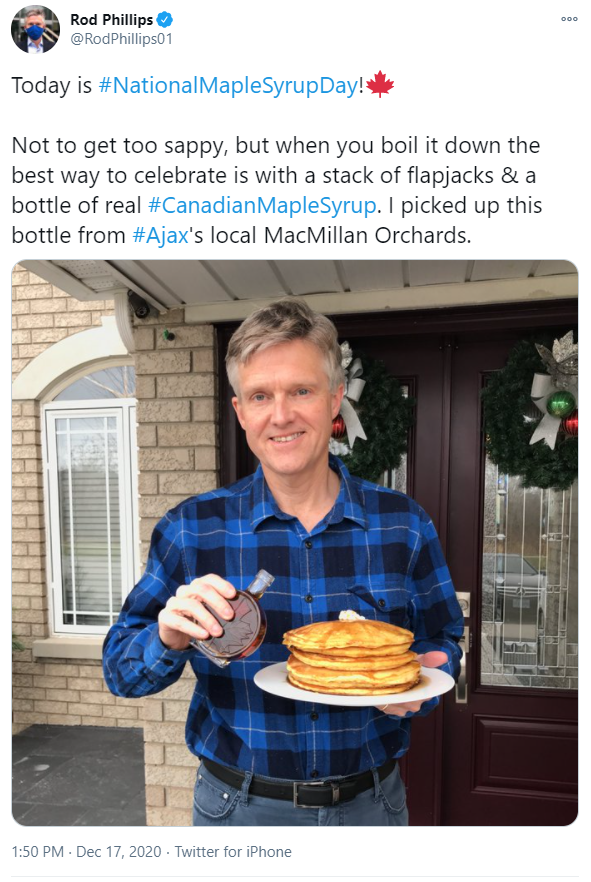 The government has been urging people to stay home as much as possible during the pandemic and especially this month, with Ford pushing for international air travel testing at Pearson Airport.

"We need to test air travellers when they arrive at the airport, this is critical," he said last week.

Phillips, who represents the riding of Ajax, also posted about the sacrifices Ontarians have had to make during the pandemic, such as on Christmas Day.

"We're meeting virtually and online and not able to be in person with as many family and friends as we'd like to," he said.

Although the province-wide lockdown wasn't implemented until later in the month, on December 10th, Ontario Chief Medical Officer of Health Dr. David Williams said he had "great concerns" about people traveling internationally.

The Government of Canada also advised against non-essential travel early on in the pandemic on March 13th.

Toronto was first put in lockdown November 23rd and Durham Region which includes Ajax, was put into the Red-Control zone that day as well.

Phillips was appointed minister of finance in June 2019, taking over for Vic Fedeli who originally held the cabinet post to begin Ford's tenure as premier.

With files from NEWSTALK1010 Staff

With files from NEWSTALK1010 Staff