Kitchen Party Comfort: After the shooting, how Nova Scotia mourned online with song

The pubs closed and ceilidhs halted. Facebook scrolling was one negative story after another. Heather Thompson had to do something.

“I need to figure out a way to flood my Facebook with music,” she recalls in mid-March after the pandemic had altered daily life.

The Pictou music-lover saw one performance online by a friend and then another. Despite not being the most tech or social media savvy user, she decided to create an event for more performances, which quickly turned into a group.

“It was reaching people here obviously in Pictou County and musicians all know other musicians,” she said. “But I had no idea.”

Nova Scotians and Maritimers both in and out of the Atlantic provinces were posting performances non-stop and it wasn’t long until people in dozens of countries would take part as well.

It was a page of simple acoustic performances and family bands in their basement. Young harpists and musical theatre singers doing Fiddler On the Roof. Young children jumping up and down as their parents played guitar to someone playing every instrument and singing Everybody Wants to Rule the World. Some do live streams for several hours.

And it wasn’t just amateurs either, with Jimmy Rankin, Johnny Reid and Classified all deciding to get in on the action.

The great Cape Breton fiddler Natalie MacMaster checked in from time to time as well.

“I think it’s really cool, what are you going to do when you’re handed a bowl of lemons? Make lemonade, so that’s what they did,” she said.

Speaking of MacMaster’s musical tool, a 17-year-old fiddler named Emily Tuck posted a performance too, capping it off by saying “there’s some fiddle for ya” with a smile on her face. 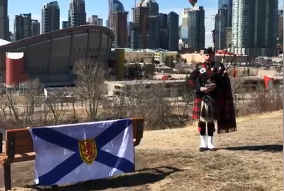 And then it happened.

And we still don’t know exactly what happened, and perhaps just as important what didn’t happen. How? Why? There? Why them?

One of the most rural areas of Canada’s Ocean Playground had turned into the unlikely scene of the country’s worst mass shooting in history, with 22 lives ripped away.

“Every hope of feeling safe, of where I live, just went out the window,” MacMaster said.

Antigonish’s Betsy MacDonald, who would post nightly to the page for a musical outlet during the shutdown, couldn’t find the words.

“Just speechlessness and not having any bearing on the situation,” she said.

She may not have been posting, but the page wasn’t slowing down. And not always for the better.

Because of its reach and popularity among Nova Scotians in and out of the province, along with the music, members were posting everything from music and heartfelt messages to news stories, rumours and speculation.

“Sharing names of victims before they were officially released and photos of burned out vehicles, so trying to get a handle on that as quick as possible was really quite a challenge, so we decided to put post approval on, straight across the board, which presented its own set of issues,” Thompson said, as thousands of posts were coming an hour.

The tightrope for Thompson and her administrators was finding a balance between an outlet for those who were posting music, but others who needed an outlet and a search for information where it would be readily available.

But she was also receiving messages from those related or closely connected to the victims asking them to not allow certain posts.

“There were times that we thought okay, maybe we should just shut the group down,” she said. “I feel like at this point looking back, we did the best that we could.”

In an effort to find some order, Thompson posted herself, asking anyone that just wanted to write something on the page to do so under hers, so those posting music had its space back.

It flooded in. A teenager doing a modern take on Sounds of Silence. Simple renditions of O Canada by young and old. Commemorative country to gospel. And every kind of Amazing Grace you could think of: guitar, piano, keyboard, trumpet, fiddle, cello and of course, bagpipes.
MacDonald and her siblings found the right note.

“One day Margaret (sister) just sent a message to all of us and said, hey we should record the Parting Glass,” she said. “We were all just like yes, and I think that made so much sense for all of us and it made way more sense than trying to talk about it.” 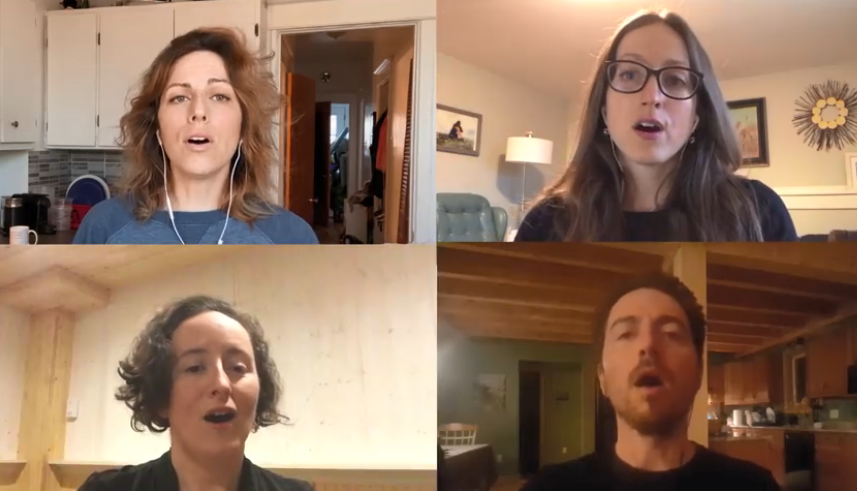 MacDonald, her two sisters and brother each recorded their own video track, which was then mixed and edited into one video, and was quickly being shared on the page after being posted.

“It was considerable,” she said of the reaction, choosing the same song they sang together at the funeral for one of their young cousins a few years before. “We associate that song with a lot of grief, but it’s a powerful piece of music about saying goodbye.”

And that performance of Tuck made its way to MacMaster as her husband Donnell came to her with his phone in hand.

“He said ‘you won’t believe what's on this,’” she recalls, as he informed her of the clip that was now being widely shared, after it was confirmed that Tuck, as well as her parents Jolene and Aaron, were among the victims.

They sat in their laundry room and watched Tuck play.

“It was real sad. And it was real beautiful,” she said.

So when she was asked the next day to take part in the Nova Scotia Remembers TV special, Donnell suggested she play the same song Tuck performed, In Memory of Herbie MacLeod by Jerry Holland. She recorded her piece, with her daughter accompanying her on piano, which would be edited by the producers of the special.

It was the seminal moment of the broadcast.

“For days I was getting phone calls and emails and texts and a social media blitz for sure,” she said.

“Heartbreakingly beautiful, that’s the only way I can accurately say it and I don’t even know if that does it just it,” Thompson said.

“That moment brought me to tears,” MacDonald said. “What those musical moments did for me and a lot of people was simply just to allow us to cry, like I had been holding in all this emotion and having a hard time processing it and just stopping to feel, the pain and the shock and the loss and I think for me, me and music was a big help.” 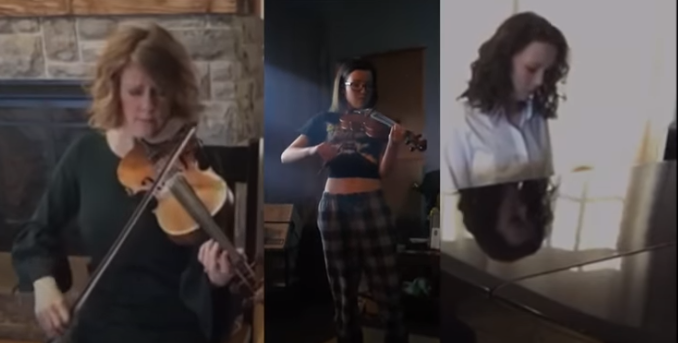 Natalie MacMaster playing alongside the online performance of Emily Tuck for the Nova Scotia Remembers special, accompanied by her daughter (right).

For Tuck’s family, the performance was a posthumous dream come true.

“We were so honoured because she was one of Emily’s idols,” Tammy Oliver-McCurdie, Tuck’s aunt, said of MacMaster. “My heart was taken.”

Oliver-McCurdie would rewatch Tuck on the Kitchen Party page as a part of her mourning process, while also taking in the other tributes on the page.

“It meant more than words can say, because there’s no words for what happened,” she said. “I’m so glad that they shared a bit of their heart and soul with us.”

After couple Alanna Jenkins and Sean McLeod were killed in the shootings, Jenkins’ father Dan insulated himself with his wife as they waited for their son to come home to Nova Scotia from Calgary.

He described the time as a living hell, especially the first week as they dealt with the unfathomable grief, with no ability to see extended family, nor any idea it would eventually be seven weeks until he’d get his daughter’s body. It wasn’t until about a week until he saw the tributes online.

“Some of them were that good, it was very difficult to listen to, because it was almost like that some of them were writing them for her,” he said. “My daughter was a very musical person, she loved music, it was just and some of the things that were done and sang were just so heartfelt.”

With no mass gathering or funeral or memorial to organize, Jenkins was being virtually comforted by complete strangers.

“It's almost as if they were grieving with you,” he said. “I really felt honoured that they would take, not just their time, but put their whole heart and soul into it.”

Jenny Kirstead, sister of victim Lisa McCully felt the love not only the support through the tributes during the TV special specifically, but from complete strangers.

After an interview she gave which included a clip of McCully singing with her children a few weeks before the tragedy, she was sent a quilt with lyrics of the song sewed into it.

“Every gesture matters,” Kirstead said, adding the performances reinvigorated her national pride. “It really did make me proud to be Canadian again.”

And for Thompson who began it all, admittedly as a fluke back in March, it reinforces that even during a time of isolation, Nova Scotians find a way to connect.

“In the real world, we would be delivering food to people and we would be celebrating lives together and those sorts of things, but in lieu of that we have the Kitchen Party,” she said. “All I did was click a few buttons, because really I was feeling pretty bad for myself.