A man in his twenties is in hospital with life-threatening injuries, after a shooting in downtown Toronto.

It happened on Willison Square, just off of Grange Avenue, near Spadina and Dundas Friday evening.

The man was found with a gunshot wound in the basement hallway of an apartment building.

Speaking to CP24, this woman and a friend were returning to their Airbnb unit, when they spotted the victim. They quickly put their First Aid training to use.

"We had gone into the basement that I'm currently renting and we saw a man, just laying there, covered in blood. I immediately freaked out, dropped everything and ran up to his chest and tried to apply pressure and saw if he was breathing. His vitals were good. He was talking to me a little bit and then not too long after, the paramedics and everyone came in."

Our media partner CP24 is reporting that there may have been a second male victim. He was not shot and did not seek medical attention at the scene.

Police are looking for one male suspect.

He was wearing a black track suit with white stripes and white running shoes.

It's unclear at this time if he fled on foot or in a vehicle.

The investigation is ongoing. 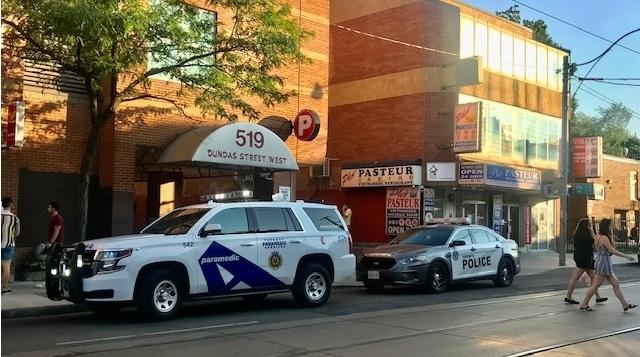