MONTREAL - Dozens of Quebec residents are facing fines for violating the province's newly enacted curfew on Sunday as the COVID-19 infection rates the measure is meant to curb continued their sharp upward trajectory.

Provincial police said they targeted about 20 locations across multiple municipalities in response to protests against the curfew, which took effect across the province at 8 p.m. on Saturday and issued more than 150 tickets.

Apart from those violations, however, the force praised the public for its response to the rules set to be in effect for the next four weeks.

"Except for a few incidents, excellent cooperation from the public was noticed,'' provincial police said in a release.

Under the terms of the curfew, all but certain exempt groups of residents will be required to stay off the streets between 8 p.m. and 5 a.m. until at least Feb. 8.

In Quebec City, approximately 20 people protesting the measure outside the Museum of Civilization in Old Port around 8:20 p.m. were slapped with fines, said police spokesman Sgt. Etienne Doyon, adding that some of those individuals were detained after they refused to identify themselves.

Police in Montreal issued tickets to people protesting the measure in the city's Plateau borough, according to spokeswoman Const. Caroline Chevrefils. A protest in Sherbrooke, Que., prompted local police to fine about a dozen attendees.

Quebec's Public Security Minister, Genevieve Guilbault thanked Quebecers for cooperating with the measure in a post on Twitter Sunday.

"Quebecers respected the curfew last night to break the second wave,'' she wrote. ``I want to thank you for your solidarity. We are doing this for our health-care workers and to protect the lives of our vulnerable people. Thank you.''

"I was carefully watching what happened last night with the curfew and I want to recognize the exemplary work by police officers throughout Quebec,'' he wrote on Twitter, adding that he wanted to "thank Quebecers for their excellent cooperation.''

One planned protest in the Montreal suburb of Longueuil appeared to fizzle, according to local police.

"We arrived there and there was no one,'' said Capt. Jean-Christophe Fortin of the Longueuil police. "The impact of a $1,500 ticket deterred people well.''

In nearby Chateauguay, police had stopped 143 vehicles and 161 people by midnight. They issued six tickets.

"The majority of vehicles intercepted and citizens stopped had a valid reason that is on the list of exceptions,'' said spokeswoman Const. Jenny Lavigne.

The rising tide of COVID-19 cases the new curfew is meant to quell continued to gain momentum on Sunday as the province reported 2,588 new infections and 39 new associated deaths. 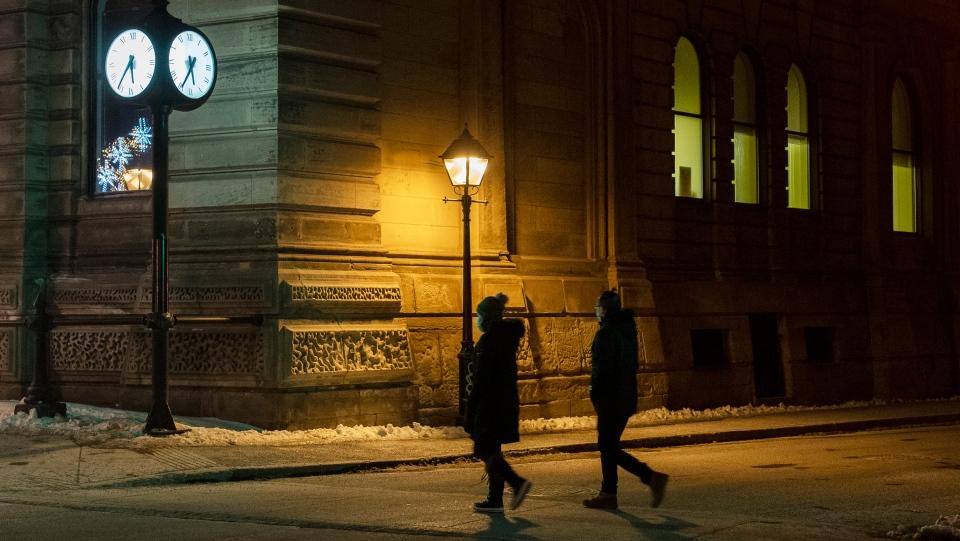 Public health authorities said 14 of the newly-reported deaths took place within the proceeding 24 hours, with the rest taking place at an earlier date.

Quebec has reported an average of 2,645 new cases a day of COVID-19 over the past week.

The Health Department said Sunday that 1,380 people are currently hospitalized in association with COVID-19, a decline of 12 from the day before. The number of people in intensive care declined by three from the previous day to 203.

The province said 9,264 doses of vaccine were administered Saturday for a total of 84,387.

The province has given out 74 per cent of the vaccine doses it has received, Health Minister Christian Dube said in a post on Twitter Saturday.

Quebec has reported 228,821 confirmed cases of COVID-19 and 8,686 deaths linked to the virus since the beginning of the pandemic.