After a 231-page report by Ontario’s auditor-general finding the province’s COVID-19 pandemic response was heavily slowed by not implementing previous recommendations, mismanagement and confusion on strategies, and a lack of medical leadership, Premier Doug Ford blasted the findings in response.

Lysyk, who has been in her role since 2013 said that because previous recommendations on emergency preparedness and planning made from audits and other special reports had not been implemented or updated, it significantly impacted Ontario’s response.

She also pointed to specific decisions by the government that led to mismanagement and confusion not only among decision-makers, but public messaging.

For example, the province already had a Provincial Response Plan in place under the Emergency Management Office, but instead opted to follow a new one after consulting with firm McKinsey & Company (a sole-sourced contract.)

Lysyk also found the province’s Health Command Table governance became too burdensome over the pandemic’s response, eventually growing to over 500 members when you take into account all the different subcommittees.

She found that certain decisions were made contrary to public health advice, such as expanding testing to asymptomatic residents and visitors to long-term care facilities requiring a test.

The report also said that Chief Medical Officer of Health Dr. David Williams and other public health officials didn’t take the lead in the response, instead with Williams essentially serving as an advisor to cabinet and the premier, which made final decisions.

“The disconnect we saw here from the discussions with the public health community was that when their advice is not followed, they just want to understand where it’s not followed,” she said. 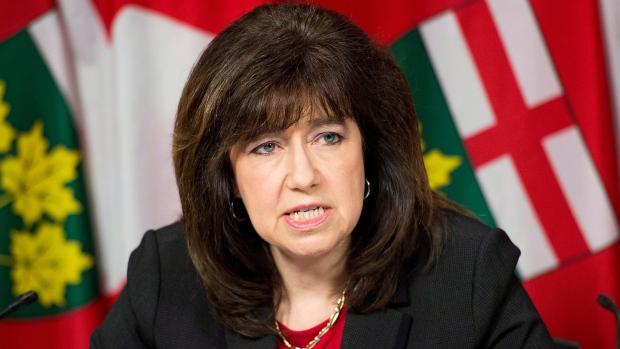 But the conclusion on Williams, as well as other public health leaders are what prompted Ford’s full defense, saying that Lysyk was overstepping in her mandate to analyze value for money.

“There’s a big problem with an accountant that starts giving me health advice,” he said. “You’ve never, ever heard me criticize the auditor-general.”

“But to sit in the office and throw hand grenades at Dr. Williams and his team and the minister of health is totally unacceptable.”

Lysyk responded to similar criticism from the government earlier in the day saying like all reports, they are fact-checked by experts and looked at by government bureaucrats, from Public Health Ontario to the Secretary of Cabinet.

“They agreed to our recommendations in these reports and that is documented,” she said.

But the premier’s office put out a statement - along with a fact-check sheet disputing various report findings - that those signatures referred to the responses to the auditor-general’s queries, not the finding of the report itself.

“Letters acknowledge that the Ministry of Health has provided timely and direct access to our records, including electronic records, for the purposes of the audit. In addition to these letters, the Ministry’s response included over 20 pages of fact checking provided for each report,” the ministry said in a statement.

The key finding says Lysyk was the main lesson from SARS wasn’t implemented, being proactive, rather than reactive during the pandemic, while Public Health Ontario and the Emergency Management Office of the Ministry of the Solicitor-General played diminished roles.

Along with the command table growing to hundreds of members, she wrote that video conferences weren’t organized until July 14th, Williams didn’t chair many meetings and there was a lack of note-taking, leading to confusion not only among officials, but that it eventually led to poor communication to the public.

For example, she said the decision to open up asymptomatic testing was poorly executed and assessment centres were burdened with lineups. There was also no emergency management IT system, the province never took multi-year practice tests and when it came to contact tracing, only nine per cent of the 2.5 million international travellers to Ontario were reported to the province, a federal responsibility.

The report also outlined a delay in publicly acknowledging when community transmission was occurring, mixed messaging on travel advice with other provinces and the feds, never having a provincial order to protect farm workers and that a masking order didn’t come until October 20th.

As for why the original Provincial Preparedness Plan was shelved in place for a new one after consulting, Health Minister Christine Elliott said there were gaps, such as building lab testing capacity, while acknowledging certain emergency response plans had not been updated since 2013.

“Yes, had some of that work been done, it would’ve been easier for us to do the work that we needed to do,” she said. “But we still did it.”

Elliott would not say when exactly her ministry realized plans had not been updated, and when asked if the deputy health minister - who was an associate health minister earlier this decade - should be removed, Elliott said she should not.

As for Liberal responsibility, current leader and former cabinet minister Steven Del Duca was pressed by reporters over how much of the current situation is because of their inability to implement more measures.

After first saying that Ontarians he’s speaking with “aren’t looking in the rear-view mirror,” Del Duca acknowledged his government had not been perfect.

"I recognize that we weren't, but as someone running to be premier of this province in the next election campaign, I pledge that dealing with a public health crisis means that I'd be listening to public health leaders," he said.

Lysyk called the criticism early in the day by the government “a bit unexpected” because of the known fact-checking process already in place.

She added this wasn’t to assign blame, but to ensure that if another emergency comes that the province is ready.

Still Ford unloaded on the document and when asked which parts of the report he felt were legitimate as several examples were cited, he maintained that Lysyk was out of bounds.

“Stick with looking for value for money,” he said. “Don’t start pretending you're a doctor or health professional, because I can tell you, you’ aren’t.”

This all came on the same day the province outlined its holiday public health guidelines, which asks people to only celebrate with those within their household, while those who live alone can join one other household.