In what was the largest teacher protest at Queen's Park since the late 1990s, educators from all four major unions gathered at the legislature as the ongoing labour battle with the Ford Government continues.

"This is more intense I think," Garek Drewnikoski said, a teacher of 25 years who was here when teachers descended to protest the Mike Harris government. "For the last 10 or 15 years, we've been facing a lot of cuts."

The protest came after weeks of rotating strikes from the various unions, but this was the first coordinated effort among them as all remain without a new contract with the government.

Premier Doug Ford and Education Minister Stephen Lecce have focused their message on teachers wanting too much of a pay increase at two per cent, while the unions have argued against the government's plans to increase class sizes over the next four years in mandate e-learning courses.

"What happened in the past, we were two weeks out, there was a lot of money the government saved and then at the end of two months, they agreed to everything," Drewnikoski said. "This is just politics."

10-year-teacher Kerwin Liverpool says he works in an inner city school that has seen its supplies and resources shrink in recent years.

"We get $10 per child," he said. "So I'm coming out of my pocket to make sure that we have visual aids, we have assessments, we have things that kids can actually have tangibly in the classroom."

He also took issue with the plan to increase class sizes from the current level of 22.5 to 25 over the next four years.

"When we're trying to cut back, think about the impact it will have in a capacity of students that are not learning at the same speed, that are not at the same level and teachers trying to facilitate all that by themselves," he said.

The government has often countered that it's increasing education funding by $1.2 billion in education, although a big part of that funding does towards child care programming.

"I'm responsible for children from zero to Grade 12 and I don't apologize for ensuring that in the earliest years of learning, we have a positive, thoughtful approach to helping our young people, nurturing that talent in the most earliest of years," he said. Ironically, the City of Toronto has often clashed with the province over a lack of adequate child care funding.

Despite being one of the two contentious figures in the eyes of teachers along with the premier, Lecce maintained that he's doing what's best for students, along with ensuring the province is fiscally responsible.

"I've never let this be about me, I really do believe that our province needs ministers and political leaders that are prepared to make sure the education system is putting the interest of our kids first, if that means fighting hard and taking a principled position for merit-based hiring, I'm prepared to be that guy," he said. "If it means fighting to make sure that we provide fair increases to workers and educators, but not a $1.5 billion hike in compensation for some of the highest-paid educators in Canada, then I'm prepared to be that voice."

As for where the strikes go from here, many eyes are on the Elementary Teachers Federation of Ontario, whose president Sam Hammond said news is coming on Monday about future moves.

He would not indicate it that means a full strike, which the government could respond to with back-to-work legislation. 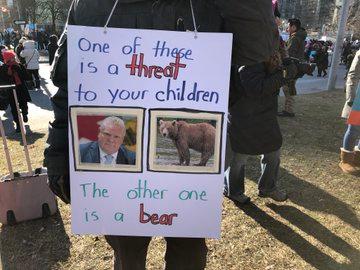 "We will let everyone know on Monday what our intent is and what we will be implementing as of Wednesday," he said.

"I would hope that it's not necessary to escalate beyond anything that we've done so far and that we can just get back to a table and negotiate a deal," he said.

The union for Catholic teachers announced later in the day it would be returning to the table with the government next week.

Many teachers at the protest said they were encouraged that educators from all unions were together, but also admitted they didn't know where the resolution was going to come from, as well as some being sceptical.

Ford famously said during his campaign for premier that no single teacher would lose their job, but Seth Bernstein said that's already happened at his school.

"This was a position that wasn't filled, that wasn't backfilled, it's an individual who was an incredible teacher who was well-loved," he said. "So we lost that person and the six courses that she taught."

Non-teachers also expressed concern over the future, such as Laura Judge, a school social worker.

"We were cut positions last year in the spring and we are now having to take on extra schools, more workload," she said. "Our case loads are well beyond 100 and we're nowhere near the end of the year and so it's very, very challenging to meet the increasing needs."