Ontario Superior Court Justice Joseph Di Luca delivered his ruling in the case of Const. Theriault and his brother by videoconference this afternoon.

The Theriaults had pleaded not guilty to aggravated assault and obstruction of justice in relation to the Dec. 28, 2016, incident and its aftermath.

The judge-alone trial had heard Michael Theriault was off duty at the time.

Prosecutors had alleged the brothers chased Miller in the early hours of the morning, cornering the then-19-year-old between two homes in Whitby, Ont., and beating him so badly with a pipe that his left eye burst. 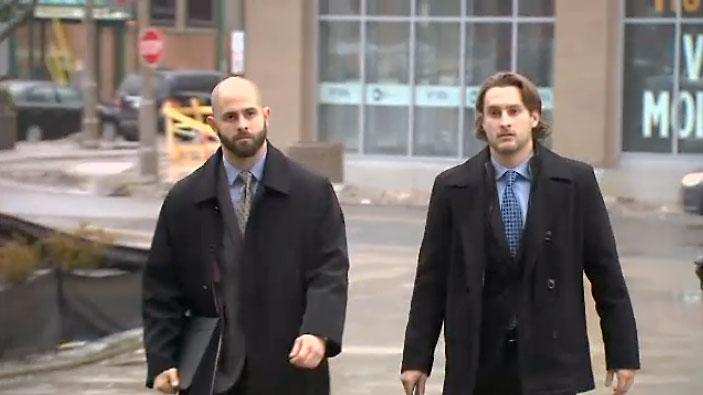 Defence lawyers had argued the brothers caught Miller and his friends breaking into a vehicle and acted out of self-defence, alleging Miller was the one wielding a pipe.

In their closing statements, lawyers for the Theriaults argued that Miller lied on the stand when he denied breaking into cars that night and, as a result, his testimony was tainted.

Prosecutors, however, said the brothers were not justified in chasing the young man and grievously injuring him, regardless of whether he was breaking into cars at the time.

They also argued that if Miller did, in fact, lie about the events leading up to the encounter, that would be understandable given that he was the one handcuffed and arrested that night even as he lay bleeding on the ground.

In reading his decision Friday, Justice Di Luca said he was mindful of the social context surrounding the case.

The case, and others like it, “raise significant issues involving race and policing that should be further examined,” Di Luca said.

But the judge said his task was not to conduct a public inquiry on race and policing, or to deliver the verdict sought by the public — it was to determine the case based on the evidence.

Miller, now 22, testified before the judge-alone trial last fall, and denied stealing from cars that night.

He told the court he was out walking with two friends when the Theriaults started questioning them about why they were in the area. He said the brothers began chasing him when he and his friends walked away.

Miller said he didn’t have a chance to fight back, and only recalled seeing Michael Theriault with the pipe.

His lawyers alleged outside court that race played a role in the attack. The case has also spurred protests by members of Black Lives Matter and other anti-racism activists.

Michael Theriault, who testified last, admitted to hitting Miller but said he only did so with his fists.

He said he was acting out of self-defence after Miller attacked him and his brother with a metal pipe or pole.

Theriault told the court they had caught Miller and another young man stealing items from a truck belonging to the Theriaults’ parents and chased him to an area between two homes.

Court heard Theriault never identified himself as a police officer, though he was later heard on a 911 call telling Miller that he was under arrest.

Christian Theriault did not take the stand.

The decision was initially scheduled for April, but was postponed in light of public health measures that dramatically reduced court operations.

“While I am disappointed that both Michael and Christian Theriault were not convicted of all charges, I am grateful that Justice Di Luca found Michael Theriault guilty of assaulting me. I am grateful that the Judge recognized that what “probably” happened was much worse. The Judge recognized that I was running for my life from people who were trying to harm me not arrest me. Officer Theriault abused his authority and he needs to be held accountable. I want to thank my family for all their love and support during these challenging times. I would also like to thank the community for all of their support. My family and I are forever grateful.”​

Important progress was made today in the ongoing struggle to make police authorities accountable. This case started with Dafonte Miller being charged with six criminal offences and has ended with a conviction of assault against Constable Mike Theriault. The force used that night by the Theriault brothers was found to have been more than likely intended to exact vigilante justice. Questions remain how these facts could have instead led to charges against Dafonte Miller. The events of that night raises questions about the entire approach of the Toronto Police Service and the Durham Police Service in attempting to shield the Theriault brothers from being held to account for their actions. We have to put an end to this type of brutality and inevitable cover up. 2 Main Office: 10 Alcorn Avenue, Suite 204, Toronto ON M4V 3A9 Phone: (416) 964-0495 Fax: (416) 929-8179 Northern Office: 104 Syndicate Avenue North, Suite 200, Thunder Bay, ON P7C 3V7 Phone: (807) 622-4900 Fax: (416) 929- 8179 Questions remain: - How could this cover up (failure to notify the Special Investigations Unit) have been jointly orchestrated by two police services (Toronto and Durham) to protect a Toronto police officer and his brother? - What was the role of the father of the Theriault brothers (Toronto Police Service Detective John Theriault) in the initial police investigation and ultimate cover up of the brutal police beating of Dafonte Miller? - In view of the catastrophic injuries to Dafonte Miller and no injuries to the Theriault brothers, how could the bogus charges have been initially laid against Dafonte Miller? - What is the justice system prepared to do to curtail the hardball legal Defence tactics in the courtroom that serve to repeatedly and mercilessly re-victimize victims of police abuse?​