The violent nature of the crash is evident at the scene.

Two cars badly damaged, one nearly demolished by the impact of a collision Monday afternoon.

The collision occurred on Dixie Road, north of Bloor Street in Mississauga, at around 2:45 p.m.. 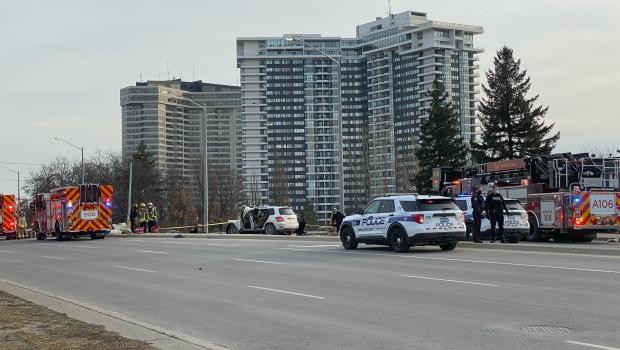 The impact so great, the engine block of one of the vehicles was knocked out of the frame and onto the roadway.

One of the drivers had to be extracated from their vehicle.

Peel Police confirm the victim was a male, who was rushed to a trauma centre, was initally pronounced dead on route.

But speaking to our media partner CP24 Monday night, Const. Heather Cannon confirmed that the victim had been resuscitated.

"Was on route to a trauma centre, via ambulance, when his vital signs went absent. So they had to redirect the ambulance to another hospital."

Const. Cannon added that the man's condition was listed as "critical and life-threatening".

The area remains closed to traffic as an investigation continues.

Police are asking any witnesses to step forward with information or possible video.