UPDATE: Protestors at MacMillan Yard in Vaughan have cleared the tracks after nearly six hours

About a hundred protestors blocking the railway tracks for nearly six hours at the MacMillan Yard in Vaughan today, have cleared the tracks in the last hour.

The Toronto Star is reporting that the group was served with an injunction, basically letting protestors know they were there illegally.

One of the protest organizers tells CP24 that they cleared the tracks because they wanted to stay safe and called today's protest a success, vowing to stage more protests in the future.

When asked why they burned the injunction, one protest organizer had this to say: "Injunctions are great for fires. We have some wood here, but of course, we did burn the injunction because we are here about the militant policing of Indigenous people and injunctions are just another way of enforcing that law on us."

Today's protest was all in solidarity with First Nations protestors opposed to a B.C. gas pipeline. And, the group continues to call for the RCMP to leave Wet'suwet'en territory in B.C. 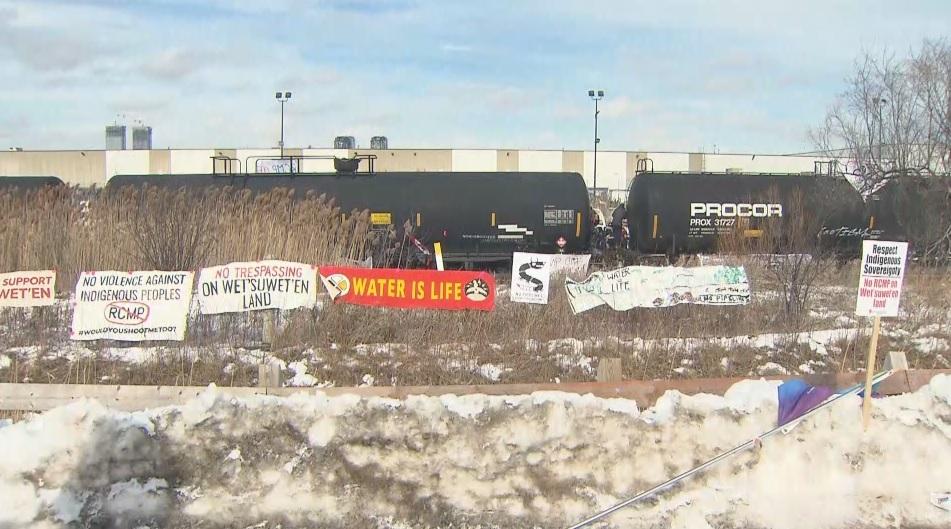 This comes on the same day Federal Indigenous Services Minister Marc Miller met with members of the Mohawk First Nation near Belleville, where they set up a blockade in the area 10 days ago, also in solidarity with the Wet'suwet'en First Nation in B.C.

The minister addressed the media before the meeting.

"I'm here to discuss peace and friendship with a bunch of people that haven't felt part of this - part of this country. They felt like allies at times and they've been betrayed, so all of Canada's hurting. The economy is slowing down. Everyone knows the reports about supply shortages, but we can't move forward without dialogue and that's what we're gonna do today."

There's been no word yet on the outcome of the talks.

Earlier this week, VIA Rail announced it was shutting down service across the country.  And CN rail traffic has been suspended in Eastern Canada, as the anti-pipeline blockades continue near Belleville, Ontario.