A man is dead following a shooting Saturday afternoon in Scarborough.

Police were called to the area of Victoria Park and Finch Avenue just before 2 o'clock this afternoon.

The victim, identified as 43-year-old Andre Charles, of Toronto, was found on Chester Le Boulevard, near Morecambe Gate.

He was rushed to hospital, but was pronounced dead a short time later.

Our media partner CP24 is reporting that the victim was in the neighbourhood, along with his wife. The pair were apparently visiting his mother, who lives in the area.

A witness says that about 15 minutes into the visit, the victim was confronted by the suspects and fled on foot in an effort to get away, before he was shot in a nearby parking lot.

Uncomfirmed reports indicate this may have been a targetted hit.  At least a dozen shots were fired.

The victim's wife and mother were not hurt.

Police are looking for two male suspects, who fled the scene in a blue Hyundai.

Police don't yet have the model or license plate number of the vehicle.

They're asking anyone with dashcam or surveillance video to come forward. 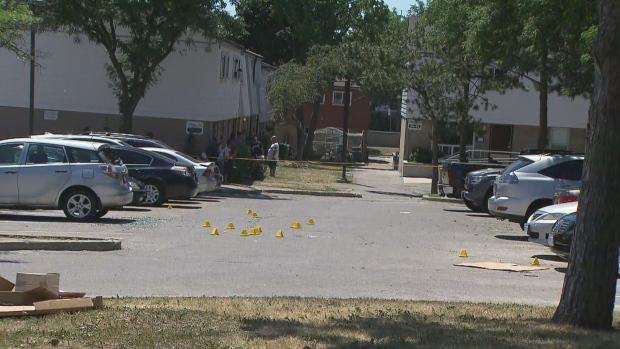