Toronto police say they had to remove several people from a mostly peaceful protest at York University that saw pro-Palestinian activists rally against an event featuring former soldiers with the Israel Defense Forces.

Const. Allyson Douglas-Cook says there was a physical altercation involving several people at the protest Wednesday night, and one person suffered minor injuries.

Douglas-Cook says a few people were removed from the event, but no one was arrested.

A variety of politicians have been weighing in on the rally, including Premier Doug Ford, who called it "vile'' and "hate-filled.''

The Premier tweeted about the incident: 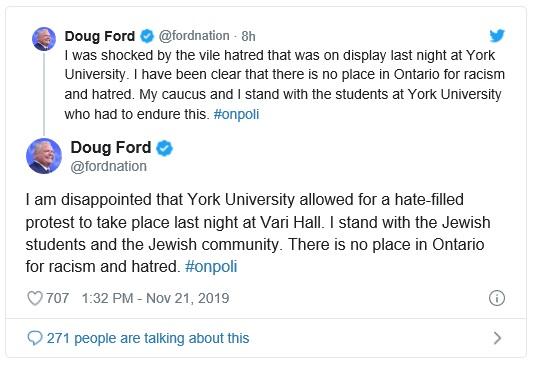 Ford says he's disappointed that York University allowed for such a protest to take place, and he stands with the Jewish students and the broader community.

The president of York University, meanwhile, says external groups were on campus "for the sole purpose of fomenting conflict.''