Viral photos and videos of large crowds of young people - as many as 10,000 at one point - jammed into Trinity Bellwoods Park Saturday, ignoring physical distancing rules, had many people fuming.

What might have some of you fuming even more today is that only 4 tickets were issued at the park by bylaw officers yesterday.

According to numbers NEWSTALK1010 obtained from the city, 14 tickets in total were issued across all city parks Saturday - to people not following social distancing measures.

Speaking to host Dave Trafford on the Weekend Morning Show Mayor John Tory conceded that the sheer number of people at Trinity made it next to impossible for bylaw officers to write people up.

"Part of the problem...when a crowd comes to a park - and it's a big park with a huge perimetre and they come in from all corners, it's virtually impossible to shut it down, once you've had it open. So, there were people there from the enforcement - but you start to get to the point, where the crowd exceeds the ability for those people to enforce the law. I can assure you that won't be the case today, " said Mayor Tory.

Tory added that at the root of this "personal responsibility" was needed on the part of people at the park.

The mayor dropped by the park last night after he got word of the large crowds.

"I talked to the people because I wanted to figure out, had they not heard the news or were the regulations to hard to understand or was there some other issue?"

Apparently, it was none of the above.

Tory says, "It was just people saying, 'I don't really think that [the virus] applies to this group. We're not more likely to get sick, so we're just here having a bit of relief from being cooped up in our apartments.'"

While the mayor says he totally understands that sentiment - that people are tired of being cooped up indoors - he says all they had to do was to spread themselves out in smaller groups and keep two metres apart, because there was plenty of room in the park.

Tory notes while some people were following physical distancing advice, most were not. 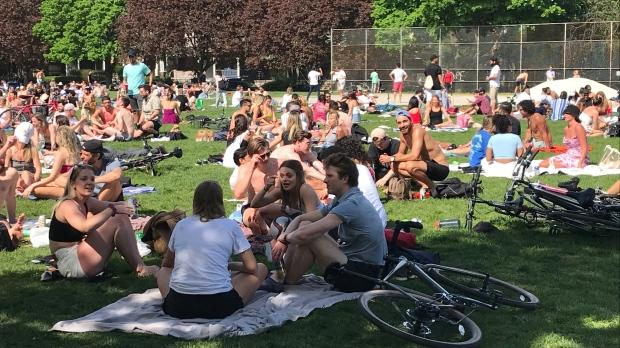 "This was a group of people, who for whatever reason, decided they weren't going to follow the rules and weren't going to exercise any degree of personal responsibility. It's disappointing. It's maddening and I trust it's not going to happen again."

"We are disappointed, given all we've been through," said De Villa, "But again, I would reach out to people and say look, you know, we get it... I understand - it has been difficult you know, being at home, isolated, being away from work, school and all the things that we know contribute to our daily lives, but we are in the middle of a global pandemic."

De Villa adds we're not out of the woods yet.

"We have made alot of progress. We've spared alot of our healthcare resources and managed to avoid some of the catastrophes that have been seen in other jurisdictions, but we need to continue to maintain that physical distancing for now, so that we can get back to those regular aspects of life that we so desperately want to have back in our city."

Meanwhile, the scene at Trinity Bellwoods Park is quite different today with dozens of bylaw enforcement officers and police officers patrolling the park.

A warning, this next part of the story might make your stomach turn, but police also issued 8 tickets to people at the park for defecating and urinating outside of private homes.

Speaking to our media partner CP24, area residents say this has brought attention to ongoing problems in the area.

Toronto police Chief Mark Saunders said public drinking was also a large part of the problem at Trinity Bellwoods Park and it would not be tolerated moving forward.

He also said people showed a sense of "entitlement'' when they were urinating and defacating in alleyways and near homes in the area.

As for the latest fines for people not following physical distancing measures, the latest tally has not been released, but Chief Saunders says the focus is still on educating the public.

Meantime, City spokesperson Brad Ross urged people to take advantage of Toronto's 1,500 parks, rather than all crowding into one park.

He also said people have to plan ahead if they know facilities like washrooms are still closed.