The second phase of Ontario's vaccination plan will be based on age, essential work and hardest-hit communities, while expected to vaccinate almost nine million people between April and July.

In updated documents, provincial health officials said in a best-case scenario, Phase 2 of the vaccination plan could actually begin while Phase 1 - currently ongoing and slated to end at the end of March - is in operation.

Ret. Gen. Rick Hillier, who is leading the vaccination effort, said before then, he wants operations to be in place by mid-February.

"To turn that machine on full speed and that way, if we do get a surprise allocation in any way shape or form of the vaccines arriving in Ontario that we don't have allocated right now, we would be ready within 96 hours to take those vaccines and start vaccinating people with them," he said.

The current phase is prioritizing those in long-term care, including residents, along with front-line health care staff, Indigenous and remote communities.

The first key factor on who gets vaccinated in Stage 2 will be based on age, focusing on seniors 80 and older and working down in five-year intervals.

By the spring, the goal is as more vaccine supply comes online, that vaccinations will be able to happen at doctors offices, pharmacies and large-scale vaccination sites.

Essential workers are another priority group, however, exact details around who qualifies and how they would be prioritized at sites is still being worked out, provincial officials said.

Examples of essential workers include emergency responders, teachers, construction workers, those working in businesses like manufacturing, food processing and other locations. 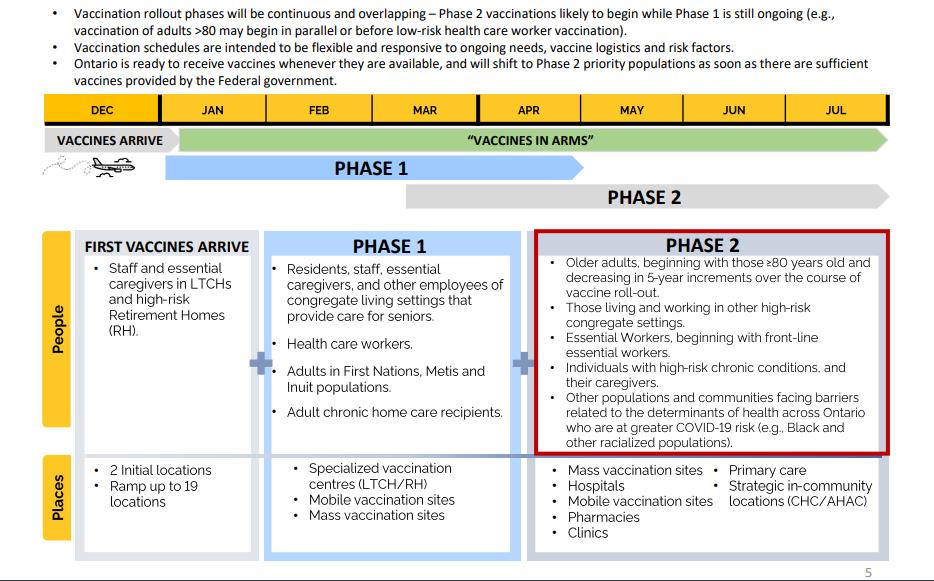 Provincial officials said like with seniors, one potential order mechanism could be age, so for example, if a group of construction workers are designated to be vaccinated, older ones and those with underlying health conditions would be vaccinated earlier.

The formula means healthier and younger individuals would be vaccinated at the later stages of Phase 2.

The third focus in Phase 2 is disproportionately impacted racialized communities, which public data shows in areas like Toronto and Peel have suffered much higher positivity rates than other areas.

Hillier says these three priorities will happen concurrently as millions and millions of vaccines become available.

"We are ready as it escalates," Premier Doug Ford added.

The first mass-scale, non-hospital vaccination site is opening on Monday at the Metro Toronto Convention Centre, which will be used as a playbook Hillier says for Phase 2 operations.

For long-term care, Hillier says the goal is to have every first dose administered to residents and staff in each of the province's facilities by February 15th.

The federal government has said there will be enough vaccines for every Canadian by the end of September.

In the short term regarding the major health care capacity issues, Ford and Health Minister Christine Elliott said the government is exploring establishing more field hospitals, as well as shifting staff from one hospital to another where the need requires it.

Ford also stressed people stay home as much as possible in light of the government recently putting a Stay-At-Home order in place.