Taylor Swift revealed a secret Tuesday about a system she uses when writing lyrics.

“I’ve never talked about this publicly before, because, well, it’s dorky,” the superstar said while accepting the Songwriter-Artist of the Decade award at the Nashville Songwriter Awards.

“I have, in my mind, secretly, established genre categories for lyrics I write. Three of them, to be exact. They are affectionately titled Quill Lyrics, Fountain Pen Lyrics, and Glitter Gel Pen Lyrics. I came up with these categories based on what writing tool I imagine having in my hand when I scribbled it down, figuratively.

“I don’t actually have a quill. Anymore. I broke it once when I was mad.”

Swift went on to explain that Quill Lyrics are when the words and phrasings are antiquated (“If my lyrics sound like a letter written by Emily Dickinson’s great grandmother while sewing a lace curtain, that’s me writing in the Quill genre.”)

Fountain Pen Lyrics, she said, are those with a modern storyline or contemporary references. (“The songs I categorize in this style sound like confessions scribbled and sealed in an envelope, but too brutally honest to ever send.”)

Swift said most of her songs fall into this category.

The singer explained that Glitter Gel Pen Lyrics are “frivolous, carefree, bouncy, syncopated perfectly to the beat” or, Swift added, “what we need every once in a while in these fraught times in which we live.” 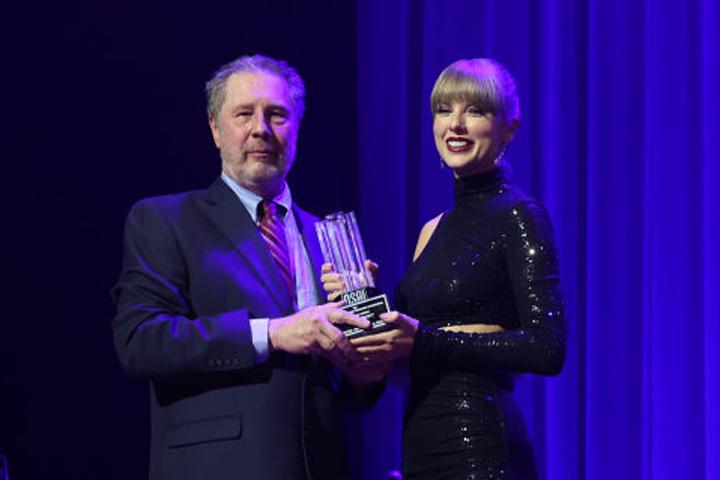 Swift has been named Songwriter-Artist of the Year a record seven times.

“For every artist or songwriter, we’re all just hoping to have one great year. One great album cycle. One great run at radio,” she said. “And these days, one song that goes viral on TikTok.”

“One glorious moment in the sun. Because on your next project you’ll probably have to invent a new thing to be. Think of all new things to say, and fresh ways to say them.”

Swift said a good song “transports you to your truest feelings and translates those feelings for you. A good song stays with you even when people or feelings don’t.”

She added: “Writing songs is a calling and getting to call it your career makes you very lucky. You have to be grateful every day for it, and all the people who thought your words might be worth listening to.”

Listen to music from Taylor Swift