Just after 1:00 a.m. on June 14, 2022, Springwater Fire & Emergency Services were called to a report of a structure fire in the area of Wilson Drive and Sunnidale Road.

As firefighters searched the area, heavy fire was observed at the Springwater (Barrie Airpark) Aerodrome located on Anne Street North. Fire crews arrived on scene to three large commercial trailers on fire in the field at the back of the property. Crews began an aggressive attack of the quickly spreading fire, with additional tankers dispatched to assist with fire suppression. 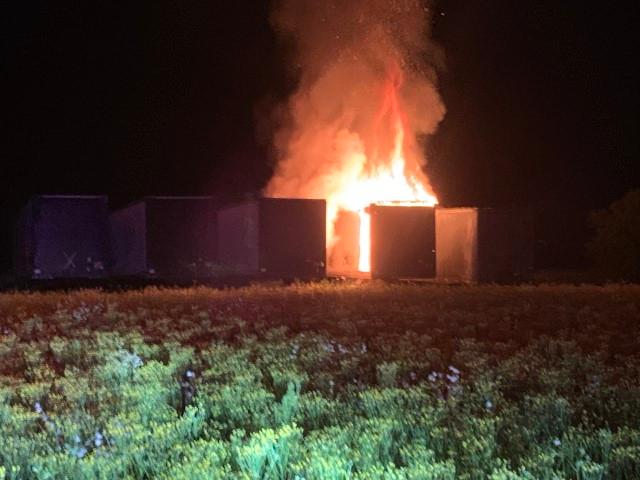 It took twenty firefighters to stop the fire from spreading to sixteen other trailers on the site. The fire took 1.5 hours to get under control. Heavy machinery was brought in to pull apart the trailers to extinguish the remaining hot spots.

“Thank you to our team of dedicated trained firefighters who managed to work through the night to bring the blaze under control,” said Deputy Fire Chief Jeff French. “Also, thank you to our Public Works Department for assisting us with heavy machinery.”

The cause of the fire remains under investigation and is being deemed suspicious. There were no injuries and damage is estimated at $150,000.